The Sims is enjoying its 20th birthday today and what better way to celebrate than by singing the praises of the iconic legend that is BELLA GOTH!? Here is a eulogy to my favourite character in the game, a woman who has been there through thick and thin (except for that time she went missing for a whole series… more on that later).

Get you a woman who can do it all 😉#dollypartonchallenge pic.twitter.com/JjJaJy1fWD

Those of us who have been around long enough to remember The Sims 1 Base Game will remember that tiny map of 10 lots which came with 3 ready made families. While two of these households reflected the kind of mid-century American suburbia that you might see on sitcoms, the Goth household stood out as a haunted mansion from a bygone era. With its weathered exterior and creepy graveyard, it gave off definite Addams Family vibes.

Soon after moving your own Sims onto a lot, Bella and Mortimer would usually come round to introduce themselves. Socialising with the serious and austere Mortimer was a little challenging at first, but his wife would usually cheerfully laugh at that joke you repeated several times before inviting herself in to dance in front of your radio of eat some canned food from the floor. If you were curious enough to load up the Goth household and look at their traits, you would find Bella to be a creative soul who loved painting and playing the piano.

*record scratch*
*freeze frame*
Yup, that’s me… getting slapped [quite rightly] by Bella Goth because I tried to seduce her husband.

In the second generation of the game there is something strange in the neighbourhood. In the neighbourhood of Strangetown to be exact! Back in Pleasentview, we find an aged Mortimer living with his two children, Cassandra and Alexander. However, there is no sign of Bella! She has mysteriously vanished and she is even listed as a missing person on the side of milk cartons! 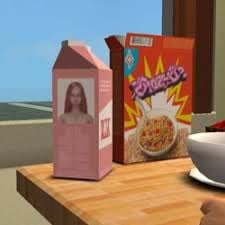 According to the Photo Album [remember those?], Bella’s last known whereabouts was the patio of notorious womaniser, Don Lothario! Had Bella been having an affair? Not this lady! If you check Don’s memory panel [remember THOSE?] you will find that he attempted to flirt with her AND SHE REJECTED HIM!!!

So where did she go? See that telescope? It appears that using the telescope attracted some aliens and she was simnapped and taken to Strangetown! The Bella that appears in Strangetown has no memories of her family or previous life in Pleasantview and there is a theory that this Bella is a clone! *gasp*

Lyndsay Pearson, our current General Manager of Maxis, was responsible for creating the worlds, houses and stories for The Sims 2 and you can here more about the creation of the Bella Goth mystery on the EA Community Team Cast here!

The Sims 3 is the prequel of the Sims franchise. It is set in the past, before Sims 1 or Sims 2. In Sunset Valley we find childhood Bella, living with her family, The Bachelors. Now, her brother Michael existed in The Sims 1 but they were never directly related in that game. In The Sims 2, which had a focus on lineage and family trees, Michael is listed as Bella’s deceased older brother. So Bella’s background may not have been totally clear to most players and people who thought of Bella as coming from a rather quirky, spooky background may have been a bit surprised by how normal her Sims 2 family seemed.

Where are my dragons!?
Image credit: Beyond Sims and The Sims Wiki.

It appears that the quirkiness was mostly on Mortimer’s side of the family. Mini-Morty lives in a different part of Sunset Valley in a typically Gothic Victorian mansion with his we-watch-too-many-Tim-Burton-movies parents, Gunther and Cornelia (who also appeared in The Sims 1, fyi). The beauty of this series of the game is that you get to play with Bella and Mortimer as childhood friends and teenage sweethearts! Or not… if you’re a monster who doesn’t appreciate true love!

The Sims 4 sits on an alternate timeline, a parallel dimension, if you will. In this universe Bella and her family have achieved a kind of final-form idealised version of themselves. Bella and Mortimer are very similar to their original Sims 1 in terms of style: Bella has her iconic red dress, Morty has his dapper suit jacket and Cassandra has her whole emo schoolgirl thing going on. And of course Alexander is there too. It feels like the time, for them, is somewhere between TS1 and TS2, they have Alexander but Cassandra is not yet old enough to fall for Don’s inexplicable charms. Better watch out for those aliens Bella! 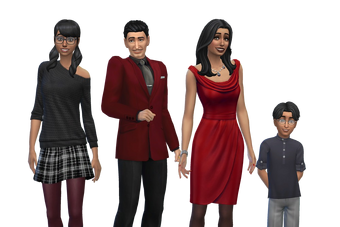 If you miss Bella and Morty’s extended family, you can find my version of some of them on my gallery here and here.

In The Sims 4, Bella’s beauty and sexuality are balanced out by her fun spirit and her dedication to her family [unless the player influences her otherwise]. Let’s hope this absolute charmer is included in the next series of the game! The Sims wouldn’t be The Sims without Bella Goth!

All hail the queen!!!

If you would like to know more about the history of the Goth family, I recommend checking out the Wiki or Plumbella’s video below.