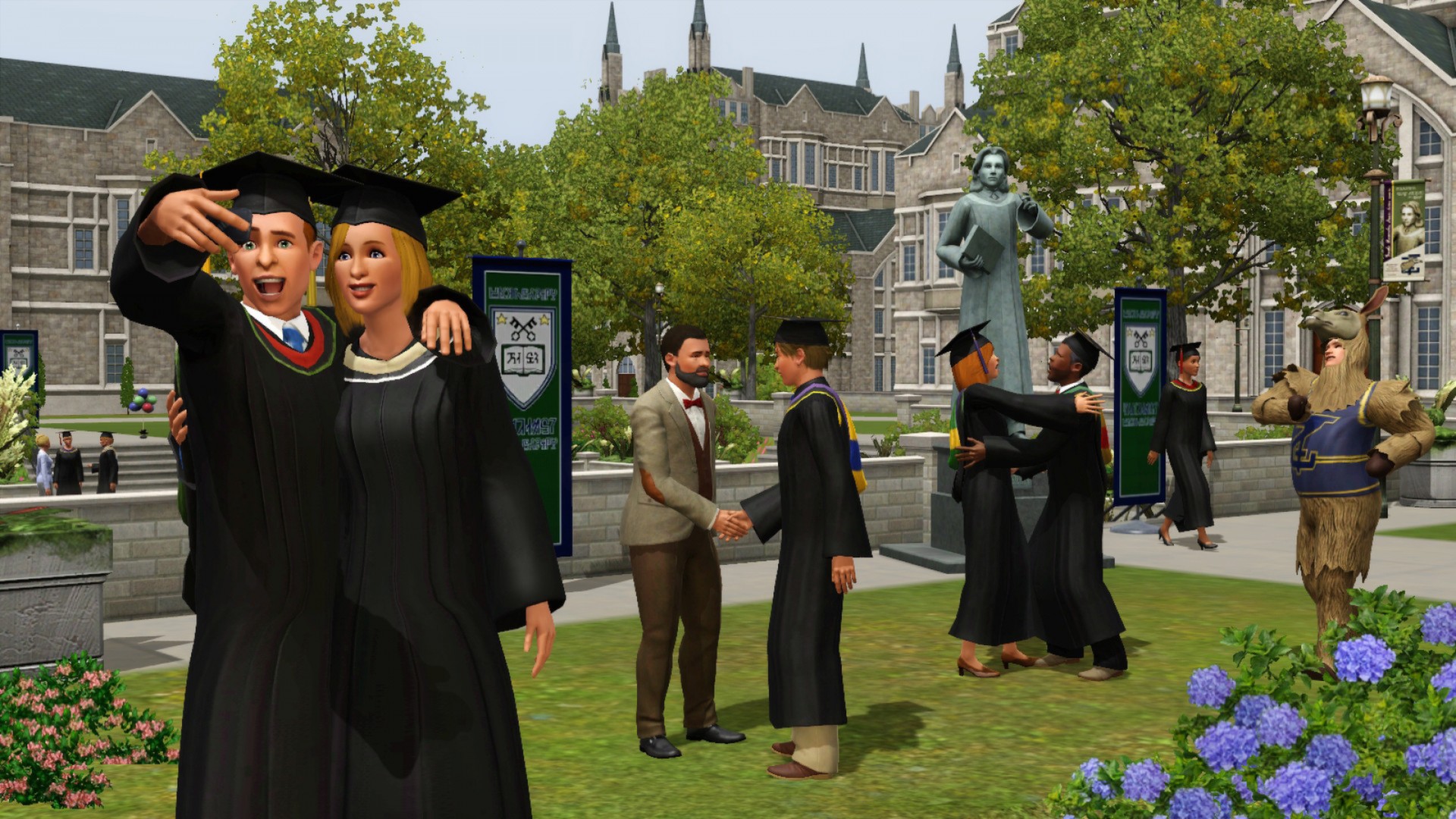 You might have missed the rumours that University might be the theme of the next Sims 4 expansion pack. This has prompted a flurry of speculation from simmers and lots of people are sharing their hopes and their thoughts. Some people don’t understand the appeal of this theme. I saw this video by Carl’s The Sims Guides where he is saying, ‘I don’t personally see how how it’ll improve gameplay outside of university at all and I personally see self-contained stuff as kind of weak’.

Now I think the arguments in that video are perfectly valid and I respect their opinion a lot. I know other simmers feel the same way. University just isn’t their thing and I totally understand that. I’m not here to convince anyone to change their mind. I just want to offer a little perspective on why some of us are hoping for this expansion so blimmin’ much! And what this expansion means to me personally.

1. University is a Rite of Passage…

…or not. It’s a huge decision in a person’s life and can be a defining moment. Will you go? What will you study? Can you still be successful if you don’t attend? After years of school where you HAVE to learn a variety of subjects, you finally get to throw everything you have into something that interests you and something you are (hopefully) good at! You become YOU. It’s a huge pivotal moment in your life where you decide what your future will be (no pressure).

For many people it’s their first taste of adulthood and independence. You may move into university accommodation or find your own place with friends (if you choose to stay at home rent free and have your mom continue to do your laundry… smart play). This is the time in your life where you experiment and refine your character, as you gain greater knowledge in your specialist area you become more uniquely and individually YOU.

In The Sims 4 we already have the Young Adult life stage, which is hardly any different from the Adult life stage. The first time we got this age group was with the University expansion pack for Sims 2 where it gave a defined experience to that specific stage of life.

I loved that I could customise and define my Sims’ characters more by choosing a course that suited them and by making new friends from one of the specific stereotypical groups that hung around campus. I could even join a sorority or fraternity if I wanted to! My art student would hang around with those long haired hippies, my athletic Sims would hang around with the jocks and my rebellious Sims would befriend those shifty looking goths in those curious blazers…

I like that my Sims could find their ‘tribe’.

So, for me, not having University has been this huge gaping hole in my game. A huge chunk of missing gameplay which renders the Young Adult life stage… pointless.

That’s not to say I wouldn’t like the choice to send other Sims there too. I was a mature student and I believe people should be able to improve themselves and their situation at an stage in life.

Talking of improving your situation, I want attending University to have a REAL impact on a Sims life. This is mentioned the the Carl’s Sims Guide video above and I agree. This shouldn’t feel like something you experience once and never do again. It should actually have long-term advantages and disadvantages that affect a Sim’s whole life.

Firstly, I personally feel like the game is too easy. If I had my way (and I know this might be controversial) I would go back and make it so most jobs have a degree requirement. I would have it so that you can only progress so far in certain careers unless you have a specific degree. Take the Business career for example, sure anyone could join on the bottom rung as a Mailroom Technician, but if you want to rise through the ranks and become an Investment Banker… well… you might need a degree for that.

The impact of this would mean that Sims who choose NOT to go to University are affected too. Their career choices become more limited. It’s not just a case of ‘Sims who go to Uni start the career higher up and make more money’ but there is also an incentive to go in the first place. This to me is realistic, it makes the game more challenging (and therefore rewarding when you do succeed) and it gives me so much more storytelling potential.

I would also like effort to be rewarded. Currently there is no point in having your teen achieve an A in school. I can’t see any discernible difference in my gameplay if my Sim gets an A or a D, other than a disappointed phone call from some incorporeal principal. So I would like there to be course requirements, scholarships and student loans. If you have great grades then you might get a scholarship to cover the costs. If you don’t… well then you’ll have to use the household funds or get a costly student loan, adding another dimension of challenge. Story-line potential here might be:

* A student from a poor family who works hard in school and gets a scholarship to study law. They hit the books and get the best degree grade allowing them to pay off their loan quickly and get a rewarding job where they help people from their own neighbourhood.

* A Sim who is not academic and who flunks out of school. They may not have a degree but they still become successful because they produce the most amazing art and open a successful retail store.

* A rich student whose parents bribe the University to get them onto the course. They spend more time partying than studying and flunk out. Their parents refuse to support them any more so they start a band and coast through life on people’s sofas. They’re pretty happy with their life.

Carl makes the point that packs shouldn’t feel like insular experiences and I think he’s right. I want this to impact my Sims’ day to day lives both before and after university. I’d love to get something like the private school from TS2 and impressing the headmaster, giving you a better chance of getting onto the most prestigious courses and unlocking exclusive scholarships. I want the friends and connections you make at University to stay with you in later life with some kind of alumni feature.

I want my Sims lives to be challenging and have meaning. I want cause and effect.

So when I talk of wanting university I’m not asking for an insular experience that I play through with a couple of Sims and forget about. I want something that affects the lives of EVERY Sim because the course of their lives pivots on their academic decisions.

3. I Went to University because of The Sims

I do not come from an academic family and my school friends were not particularly scholarly. No teachers sat me down and explained the importance of University and how it all worked. I barely even considered it. My environment told me that it was only something rich kids did… and I wasn’t a rich kid. I remember watching Romy and Michelle’s High School Reunion, a film where two friends masqueraded as business women because they wanted to pretend they were successful. At the end of the film they gave up trying to be professional and did what they loved best and opened a clothes shop.

I got a job in a clothes shop.

No hate to Romy and Michelle, they were doing the thing they loved! And running your own business is an impressive thing! But I wasn’t happy. I enjoyed what I did but it was frustrating to see people taking jobs that I knew I could do better because they were on some kind of graduate program. Eventually, working for a fashion chain started to feel a little… vapid.

If it hadn’t been for The Sims 2 University, I don’t think I would ever have considered university as an option. Playing with that expansion pack made it feel relatable and familiar. I saw that if my Sims worked hard they became successful. The Sims put the seed into my head.

In an act of what felt like pure rebellion I applied for University. In an entirely selfish act, I did the course that I WANTED to do. I didn’t know where it would take me and it wasn’t really the point. I was proving to myself that I could do it. That I was intelligent. That I was worth something. My degree is in Humanities and I took a specialisation in Classics, including Latin, partly because I have always been interested in these things and partly because everything and everyone around me had told me it wasn’t my place. It was traditionally the realm of rich, white men and I was going to wade into it and claim my seat at the table (this isn’t me hating on all white men, or even rich, white men, it’s just those specific ones that are in some kind of snooty Old Boy’s club… you know the ones). The current Prime Minister of the UK also has a degree in Classics and I feel like I could quite confidently debate with him. I studied the speeches of Pericles too and I know how to pick them to pieces.

So, thank you, The Sims, for opening a door that always felt closed to me before. Role-playing as a student inspired me to actually BE a student. To be able to visualise myself in that role. Now I feel empowered. My opinions are valid and I am worth something. You may have noticed the occasional Classics tweet slipping through if you follow me on Twitter:

I don't want to roll out the old patientia nostra line again but… pic.twitter.com/3bI5LBm2hP

This is why I consider University expansions to be so important to a life simulator. I hope that, if we get University for The Sims 4, that a new generation of simmers will be inspired to go to university who may not have considered it before.

You ARE worthy and you DO belong there. Make your space.

One thought on “What University Means to Me”