As if Cinderelli-sim hadn’t gotten into enough trouble with jungle curses and raging alien plants, the EA Game Changer program has rubbed it’s gnarled hands together in glee and provided me with an early access code for the Realm of Magic Game Pack. So now we can all watch and laugh as poor Cinderelli’s spells backfire and she burns more than just the grilled cheese. Thanks EA.

…I finally coaxed Cinderelli into a cute RoM crop top and a skirt from an entirely different pack. It’s not that I don’t like the clothes in this pack, I do! They’re a bit 90’s and I appreciate that. It’s just that I had a badly timed breakdown where I forgot how clothes worked and inexplicably got angry at EA for not giving us a pair of high rise mom jeans (witches wear mom jeans too right?). 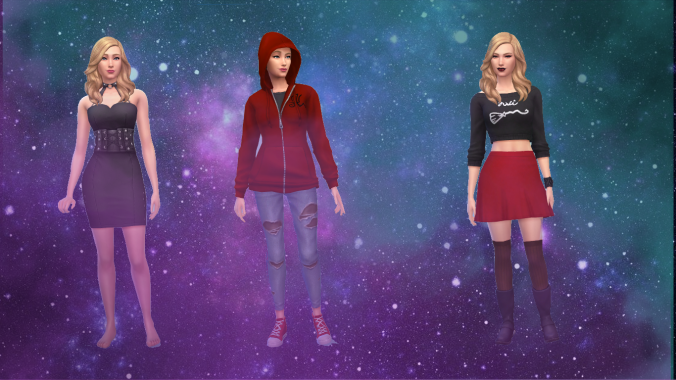 After finally forcing Cinderelli to put clothes on, I figured I should probably show of some more of the clothes in this pack (they genuinely are really nice) and decided to give the Crumplebottom sisters from TS3 Moonlight Falls a magical makeover. You’ll be able to find them on my gallery if you’d like them in your game shortly after this blog post goes live.

I think there’s a good mix of styles in this pack, the key themes appear to be Historical, Goth and 90’s from what I can see. The jewellery is GORGEOUS and there’s a nice new lipstick too.

This is by no means a thorough review of CAS so I recommend watching a CAS video on Youtube to get a solid overview.

I then got thoroughly distracted by building and playing around with the new configurable stairs and all the gorgeous Art Nouveau inspired BB content. The Crumplebottom sisters got a new house (which will be up on the gallery) and Cinderelli got a cute little cabin. 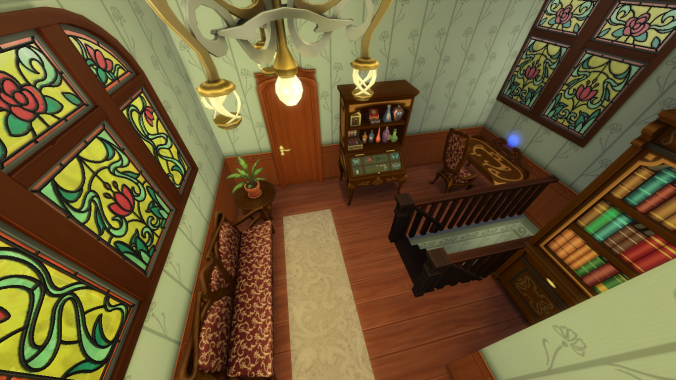 Eventually, I stopped poking around and finally jumped into the gameplay! 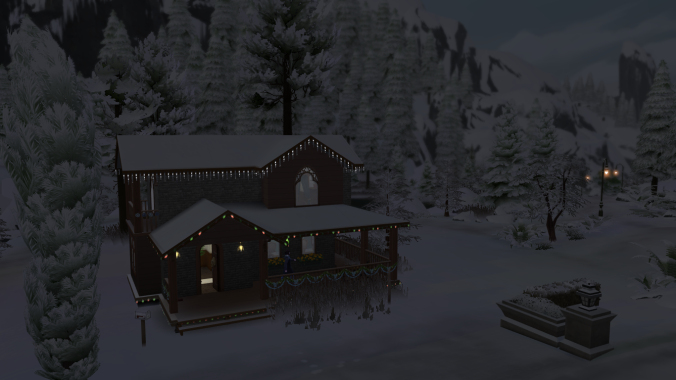 After exploring the jungle and investigating the Strangerville mystery, Cinderelli had found her blog was getting quite a lot of attention and she decided to make a career of it! So when she heard rumours of strange happenings in the sleepy little town of Glimmerbrook she jumped at the chance to check it out! She also dragged The Beast along for protection (but who will protect The Beast from Cinderelli’s attempts at magic?) and also her black cat Luna… because every Spellcaster needs a black cat amirite? Luna immediately developed a fear of Cinderelli’s cooking (smart kitteh). 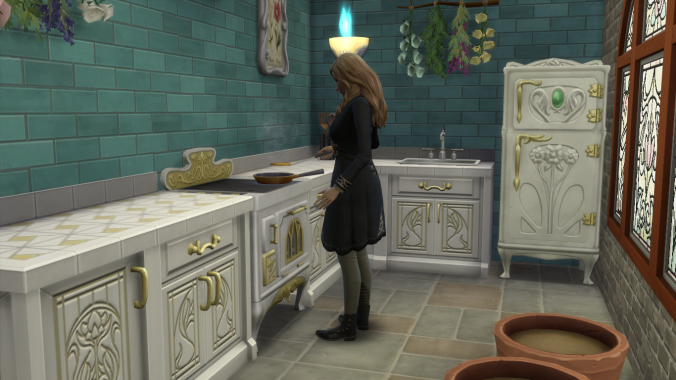 ‘So what is your plan here?’ The Beast asked over slightly burnt pancakes.

‘I guess I’ll go out and talk to people,’ replied Cinderelli. ‘Perhaps the neighbours will know something.’

The Beast raised a sceptical eyebrow, ‘You can’t just walk up to people and say “Oh hi? Are you a witch? Can you teach me some magic please?” You can’t let people know how bonkers you are so soon in the relationship.’

‘So what do I do? Talk about the weather?’

‘I don’t know… try telling a joke about Sunset Valley. Break the ice before launching into interrogation mode.’

And there was a lot of ice to break… 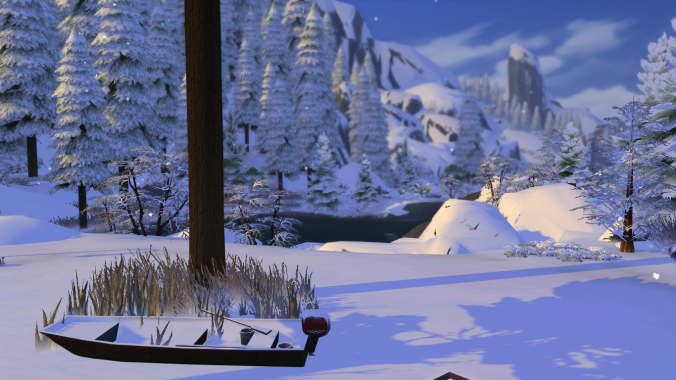 It was winter in Glimmerbrook and all the snow gave the world a magical aura. Cinderelli almost felt as though she’d teleported to another dimension, maybe she’d accidentally stumbled into Narnia and at any moment she would hear the crunch crunch of hooves in the snow and Mr Tumnus would appear!

Cinderelli splashed through a a small glimmering brook and, through the swirling morning snow flurries, saw a pink haired kawaii girl walking along the side of the road.

Not-Belle turned around and smiled mischievously. Cinderelli told an awkward joke about Sunset Valley then plunged straight in with…

[Eye’s are up here Cinderelli!]

‘So, I want to be a Spellcaster…’ [Cinderelli is not known for her subtly] ‘…any idea who I should talk to about that?’

Not-Belle giggled playfully, a noise like the ringing of tiny silver bells which frosted the air into tiny rainbow crystals with her breath. ‘You should try the pub. You’ll find plenty of Spellcasters in there.’

With a knowing wink, Not-Belle skipped off into the mist. 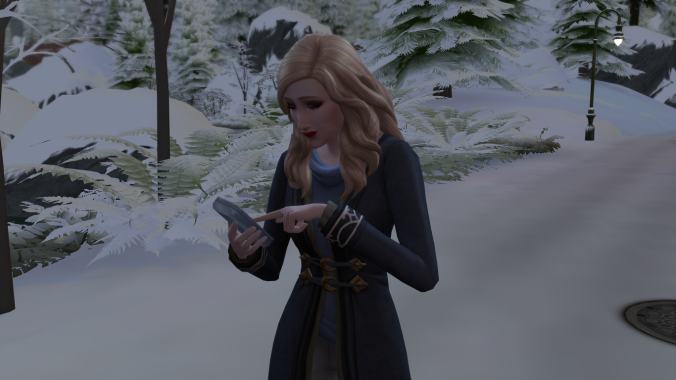 Cinderelli opened her investigative notepad app and typed: Met Belle Delphine… I think she knows more than she’s telling me. Definitely a Spellcaster!

Just then, another Sim appeared directly in front of her. She hadn’t heard the crunch crunch of anyone approaching through the snow, it was as though he had materialised right out of the swirling ice crystals.

‘No, I just moved into the area, my cottage is right over… um… it’s just through the…’ Cinderelli looked around hopelessly. She couldn’t figure out where she had come from and could no longer hear the silver trickling sound of the glimmering brook. She realised she had seen that gnarled tree before though. Had she been walking in circles?

‘No worries, my dear,’ the man’s voice was deep and silky, ‘the mist will clear soon enough and you will see.’

Regaining her composure, Cinderelli blurted, ‘I’m actually here to investigate the reports of magical duels in the area. There are rumours that Spellcasters practice in this area and their world is being torn apart by opposing forces. Can you tell me anything about that?’

A shadow passed behind the man’s eyes and then he spoke in his calm, reassuring voice, ‘There are no Spellcasters here.’

Cinderelli felt a moment of calm acceptance but she shook this off and challenged, ‘Then why are you wearing that Illuminati symbol huh?’ 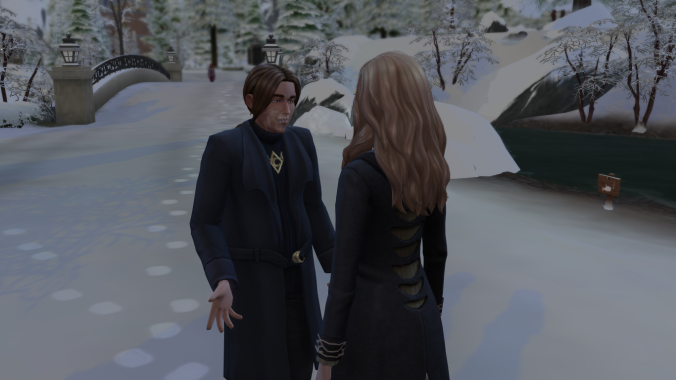 The man gave her a long, deep appraising stare before the corner of his mouth flicked up in a fleeting smile and he said, ‘You will know me, Cinderelli.’

‘Ok, if I could just get you name then…’ Cinderelli began, pulling up her notepad app.

But the man had disappeared as quickly as he had arrived.

Now… you won’t know about this because [𝐑𝐄𝐃𝐀𝐂𝐓𝐄𝐃]. However, when Cinderelli was investigating the Strangerville mystery she brought together a gang of geeky scientists and conspiracy theorists to help her fight the [𝐑𝐄𝐃𝐀𝐂𝐓𝐄𝐃] at the secret [𝐑𝐄𝐃𝐀𝐂𝐓𝐄𝐃]. Anyway, she called them and asked them to meet her at the pub in Glimmerbrook to help her investigate the rumours of Spellcasters and interrogate the locals to see if they could discover the whereabouts of the secret duels.

Cinderelli arrived at the bar and was pleased to see the whole Scooby gang was already there. After a quick reunion and a few glasses of Meloire nectar the gang were not-so-surreptitiously listening in to conversations and giving the locals serious side-eye.

One Sim (who actually seemed very sweet) asked if she could have a glass of nectar.

‘No,’ snapped Cinderelli, ‘The nectar is for Scooby Gang members only! You can join us but it’ll cost you. We want information!’ Clearly the poor Sim felt uncomfortable and got up to leave.

‘Quick, now’s our chance,’ hissed one Scooby Gang member who I’ve forgotten the name of but I like her sass, ‘Let’s follow her!’

So Cinderelli led her merry band of conspiracists out into the snow. Of course they took their nectar with them. And they chatted quite loudly about their plan to follow Spellcasters to the secret magic duel, which in hindsight might have given the game away slightly. 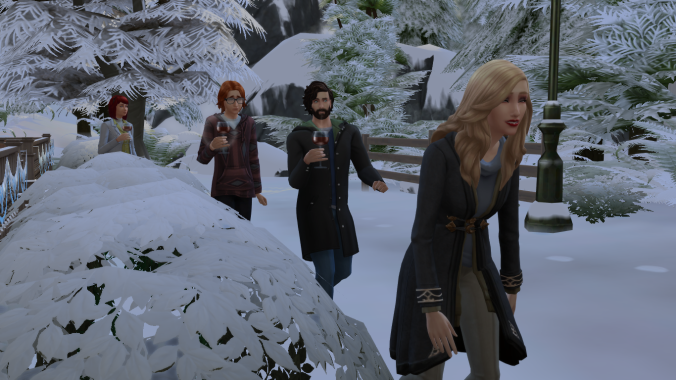 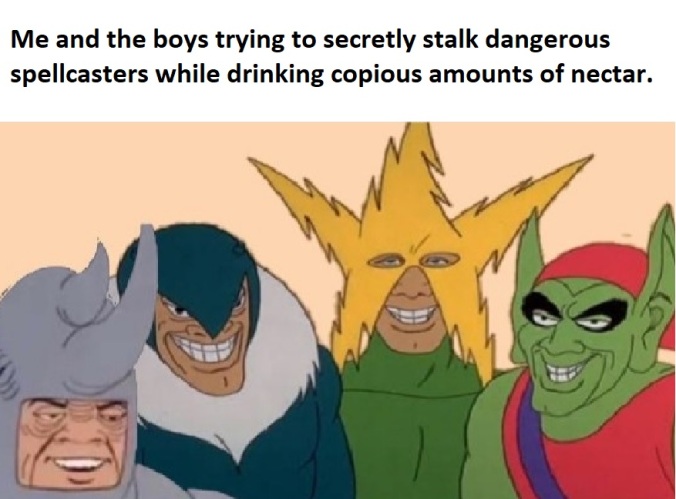 ‘Wait…’ Cinderelli threw her arms out to stop everyone, ‘Where did she go?’

The Sim had been there, right in front of them but now she was nowhere to be seen. Cinderelli’s eyes followed the trail of footprints in the snow to the place where they suddenly… stopped.

‘It’s like she just… vanished,’ mumbled The Beast behind her.

When Cinderelli looked again, there on the edge of the clearing in the place of the woman stood a hooded figure.

Cinderelli approached cautiously. Then a strange feeling of assertiveness came over her and she blurted, ‘We’re looking for a Spellcaster. A woman in a yellow dress. Have you seen her?’

The man turned slowly to look at her, his eyes cool and steely like the frozen surface of the lake. He shook his head, just the shadow of a movement, ‘No.’

‘She was right here, you must have seen her!’ Cinderelli’s tone was getting a little confrontational.

Luckily, The Beast wandered up and diffused the situation with a little Gaelic charm (it made me laugh that they were clipping so closely together, it made them look a bit touchy-feely) and the man cheerfully told them that there were portals to the magic realm all over the world and they only had to look for them. 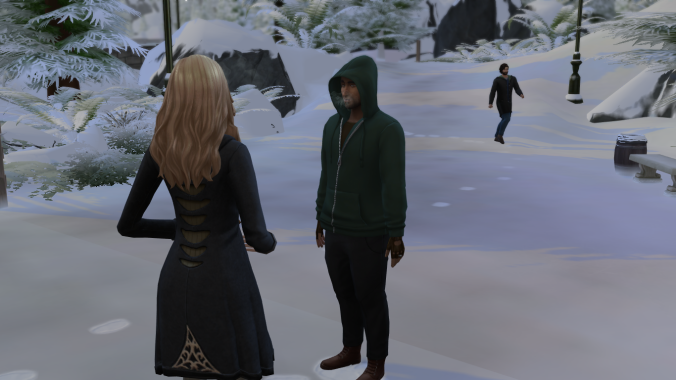 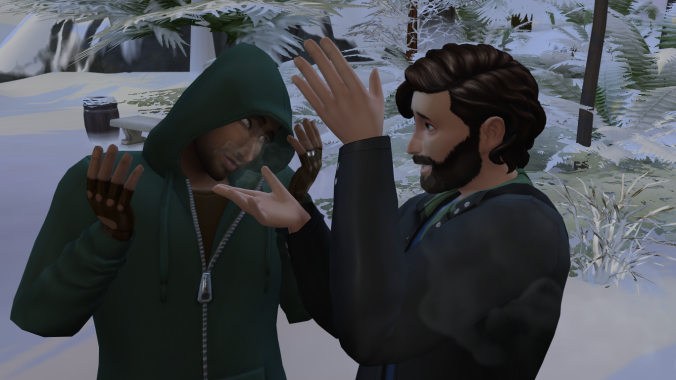 Back at the house, the Scooby gang ate a meal together (Luna the Cat helped too) and they discussed the next stage of the plan.

‘We should split up,’ announced The Beast decisively, ‘Split up and look for these portals. We can cover more ground that way.’

Cinderelli didn’t like the sound of that. Isn’t that how people get murdered in horror movies? Everyone else seemed enthusiastic though so she reluctantly agreed.

So Cinderelli set off again into the frosty night air. She was feeling nervous now, what if she got lost again? What if an evil snow queen appeared and offered her sweets and a chance to ride in her sleigh? How could she refuse such an offer?

The air grew still as the lampshades flickered on one-by-one, almost as though they were leading her down the narrow country trail by the water. The night air was quiet, devoid of all human noises, only the creaking snow and chirrup of insects filled the void. 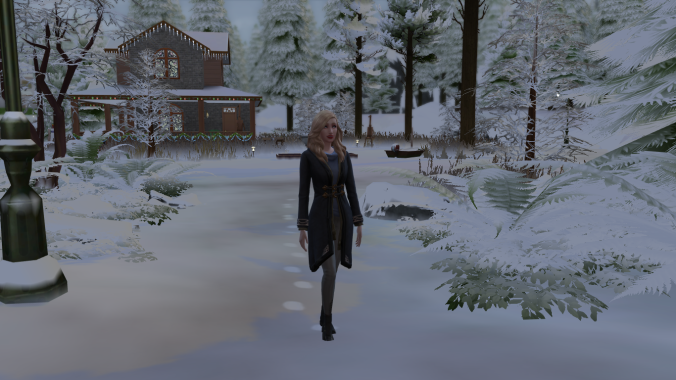 Then there were new noises. The water was flowing faster here and there was a distant rumbling sound. As Cinderelli walked closer the noise became louder and Cinderelli could hear the crashing of water falling onto rocks far below her and another noise…

… a strange musical noise, as though a thousand tiny silver bells were imitating the rushing water.

And then she saw it.

The portal to the magical realm. 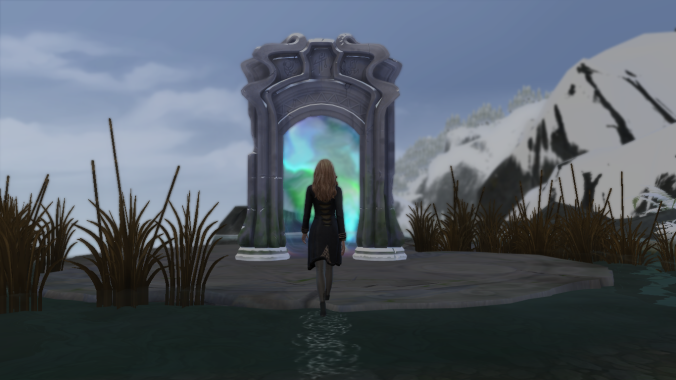 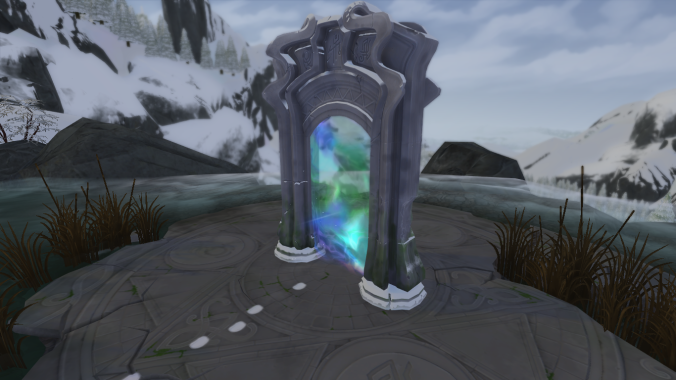 Cinderelli stepped closer… and closer… drawn by the noise which now sounded like music and laughter. She stared up at the shimmering, pulsating air in front of her for several moments until…

…she was no longer there.

Her footprints disappeared abruptly, just like the girl in the yellow dress.