The next time I played the Nihil’s life (and apartment) was still a mess. But Krista woke up in a better mood. She felt less ill than she had at the start of her pregnancy and I caught er autonomously dancing to the stereo while Tre was out busking.

She was eating breakfast when she started to feel like she needed a nap, unfortunately there was a lot of shouting going on in the street outside and it seemed to be some kind of protest. Krista went out to speak to them: to explain that she was pregnant and tired, and to ask how long they would be there for because she needed to get some sleep. The protesters were nice enough, they tried to explain what they were campaigning for, but Krista didn’t really understand and just wanted to finish her breakfast and have a nap. Tre had been busking all day, people were friendly and interested in his music, but for some reason they didn’t tip much. That is until Nancy Landgraab turned up dressed as a tourist and tipped him about five times in a row! He made over $100! Thanks Nancy!

(I have a technique now to hijack the busking stations. I have Tre talk to the Sim who is using it, then click the ground a distance away from them to use the ‘chat here’ interaction. This makes the original busker leave the station and I cancel the interaction and have Tre run back and use it himself. Clara Bjergsen’s expression after Tre did it to her was amusing. Tee hee hee!) 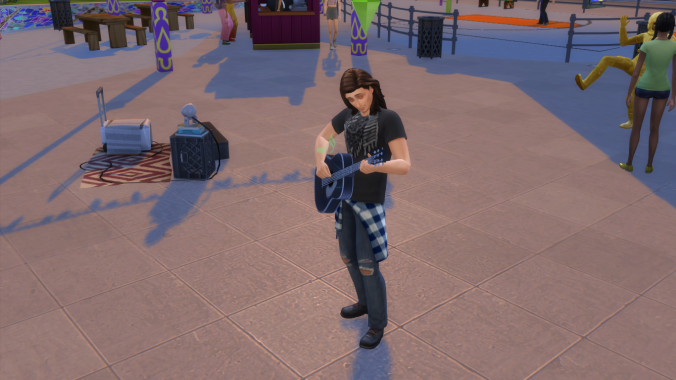 The next day Krista woke up feeling desperate for the bathroom, apparently the baby was using her bladder as a football. They grabbed leftovers for breakfast and sat down to figure out how they’d pay their bills. No one would hire a heavily pregnant girl with no skills or experience, would they? Anyway, Krista was too tired all the time to work too hard. Tre thought his guitar skills were improving an he was even starting to sing a bit, he was sure his big break would come soon!

…and then the lights went out.

They hadn’t been in the apartment long enough to have received any bills. So it wasn’t like they’d missed an electricity payment and had their service cut off. So… Krista rang the landlord. It turned out there was a problem with the fuse box and he sorted it out. He was friendly enough and even hung round to watch a bit of telly with Krista. Until she got sick again and he left quickly. She thought it was morning sickness at first but it turned out she had some kind of bug. 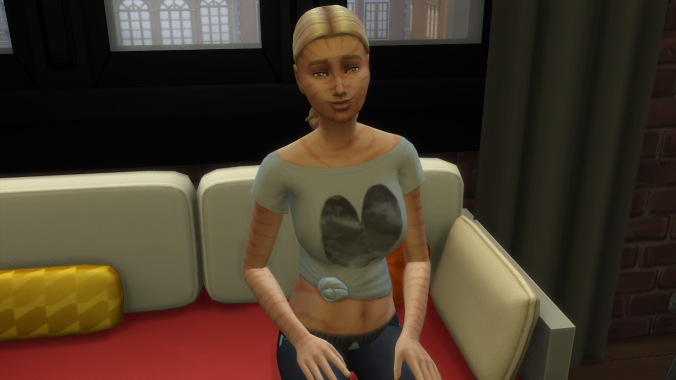 Krista and Tre really were in a sorry state! I’m genuinely worried about how they will pay their bills and if they’ll get kicked out of their apartment. They might end up living in a tent! Not good when you have a baby on the way. And I don’t think the apartment is a healthy environment with all the damp and problems. Krista seems ill all the time. I hope I can help them turn things around!