This content is no longer supported as we now have the official Laundry Day Stuff Pack.

However the posters are still available here. 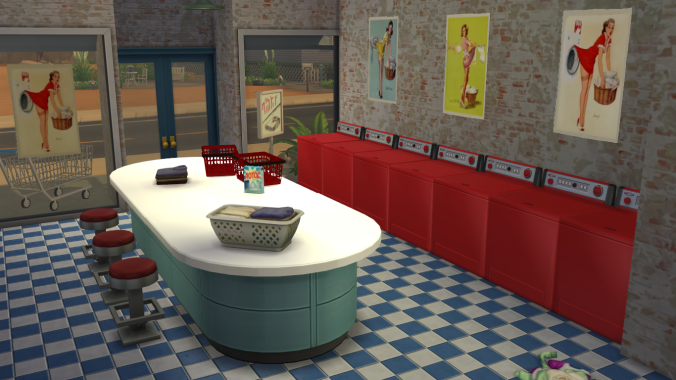 This is an idea I’ve been tinkering with for a while. In TS3 I had a laundrette where the criminals would launder their money.

(Note: all puns are intended)

I was kind-of putting it off and hoping The Sims team would have added official laundry stuff by now. But I could be lazy no more because I really wanted to play with this family, and I really wanted their ‘laundry business’ back. I thought about just converting them as decorative objects, but I liked the idea of being able to tinker with them too. I figured I’d clone a dishwasher so it would have the breakdown feature and would create a puddle on the floor. Then I figured I could clone the decorative laundry pile and tell it to act like a dirty plate, so Sims will pick it up off the floor and put it in the washing machine. The laundry pile is a free decorative item so you can just ‘buy’ it and place it whenever you want a Sim to use it.

And that’s as far as I got. I have other plans for how to improve it, but I’m honestly feeling very modding-lazy right now and I’m not in the right frame of mind to keep working on it (glad I’m a modder not a developer!).

There are a couple of issues, mainly revolving around the washing pile. It looks very crusty when a Sim picks it up. In fact, since it’s a ‘dirty plate’ Sims will actually take it to a bin to ‘scrape’ it first, which I personally think is hilarious! XD Also, if you place more than one and a Sim attempts to pick up multiple piles, it will turn into a stack of dirty plates.

So, it’s not perfect, but it works well enough for my storyline. I was going to work on it a bit more before I released it, but since so many people showed an interest in it, and because I can’t see myself doing any more on it in the immediate future, I figured I’d free it into the t’internet as it is.

I may pick it up again at some point. But if anyone would like to continue working on it, or convert more machines, or whatever, that’s absolutely fine with me. You don’t have to give credit but if you could link me that would be great! My other plans were/are:

* to look into changing the behaviour of the laundry pile, possibly making it act like trash, so sims would pick it up and it would turn into a bag rather than a stiff crusty board.

* give the machine custom tuning, changing the strings (see below) and a: possibly giving it a custom dresser interaction so sims will get undressed and drop the laundry pile. b: adding rummage interactions from bins to pick out a clean laundry pile and possibly get the sim dressed again. And c: possibly adding buffs.

* customising the strings so instead of references to dishes/dishwasher, it will be more appropriate and say laundry/washing machine.

* adding back a bubble FX.

Anyway, it is what it is for now. The package contains the laundry machine, the free purchasable washing pile, and the cheeky pin-up wall art. Dine Out is REQUIRED because it is cloned from the freestanding washer. You may also need Get Together for the pin-up wall posters. I think the laundry pile is base game.