When Asha woke up the next morning her stomach was in knots! She had always been an anxious person, but recent events were pushing her to breaking point! The big move; the new house; her kids starting a new school; her new job… all these things were giving her more things to worry about than usual.

Arranging her face into what she hoped was a bright smile, she got up to search for breakfast. Her children were discussing schoolwork in the dining room, she gave them a cheerful wave and hid her face behind the fridge door. They were doing so well and she didn’t want to make them worry about her. She couldn’t face eating anything, so she grabbed a glass of orange juice and sipped it carefully. Mahinder joined her for breakfast and was caught up in telling her about all the changes he wanted to make at the hospital, he didn’t seem to notice her nervousness.

Asha was almost happy to escape the house for work! It was too stressful trying to hide her nerves from her family. She arrived at the science facility and instantly felt sick with fear again. The complex was large and sprawling, with funny little corridors that were badly signposted. She kept getting lost or finding herself in the wrong rooms! One day she’d walked in on an experiment and all the other scientists had turned to glare at her…

It wasn’t that they weren’t friendly to her. They just seemed so busy and caught up in whatever they were working on. People were always using the equipment she needed, and she had to wait around awkwardly for them to finish. Or she would need something and have to search for it or, even worse, ask someone to help. She worried about seeming unprofessional, which she wasn’t! She had a first class degree and had plenty of experience. But starting in a new, unfamiliar workplace and not knowing anyone there was intimidating!

Asha made her way into the facility and checked in at the reception. The man behind the desk wasn’t the usual receptionist so she introduced herself awkwardly.

‘Ah, so you’re Dr Khan?’ the man laughed, his eyes crinkling warmly as he smiled, ‘I’d presumed you were a man, how silly of me!’

Asha smiled awkwardly, thinking he seemed nice but irritated that he’d expected her to be male.

‘Allow me to introduce myself,’ the man continued in a friendly manner, ‘I’m Professor Spencer, I’m in charge of the research department.’

Realization suddenly struck Asha and her mouth gaped as she scrambled for words. This was the person who’d hired her! Their correspondence had been entirely by email so they’d never actually spoken, and since she’d always signed everything as ‘Dr Khan’ she’d never given him any indication of her gender! She felt the heat rising in her cheeks.

Professor Spencer was quick to notice her distress and gave her a sympathetic smile, ‘I’m sorry I wasn’t available to introduce myself earlier in the week. I haven’t been here long myself and there have been a lot of issues to address. When I first arrived two chemists were using the facilities to dye their own eyebrows pink and green! You wouldn’t believe some of the things I’ve had to deal with! So, I’m very pleased to finally have a professional pharmacist on the team.’

Asha finally found her voice, ‘They were dying their eyebrows?’

‘Indeed,’ Professor Spencer chuckled, ‘you can’t imagine what my first day was like! I had to start disciplinary proceedings on my first day, which didn’t put me in a favourable position with the rest of the team.’

[Note: When I played the Spencer household, Harold really did find two of his co-workers had pink and green eyebrows! There was also a lady who enjoyed jumping in trash piles. So he really is trying to sort the place out!] 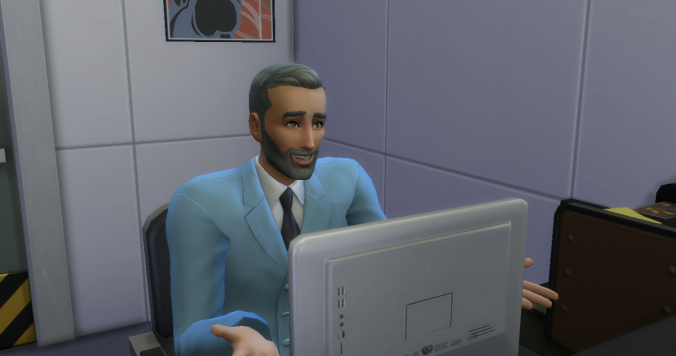 Unfortunately, their conversation was interrupted by the real receptionist (Harold was just covering the desk). Asha had taken a dislike to him, he’d been very rude and unhelpful to her, and she always felt a little uncomfortable around him. She quickly excused herself and hurried to the research lab. She checked on her work for the day ahead. Oh no! She needed to collect some samples from one of the biologists. Was there any way around it? Maybe she could send the request in an email? No… she needed them urgently for an experiment, she’d have to ask in person. She approached the other scientist nervously. She looked so busy! What if she was annoyed that Asha had interrupted her? It took her almost a full minute before she got the woman’s attention.

Fortunately, she wasn’t annoyed and actually seemed quite friendly! She introduced herself as Diana Banks [note: another one of my sims, I have a lot of scientists!] and quickly found the samples that Asha needed. Thankfully, Asha scurried back to her workstation. 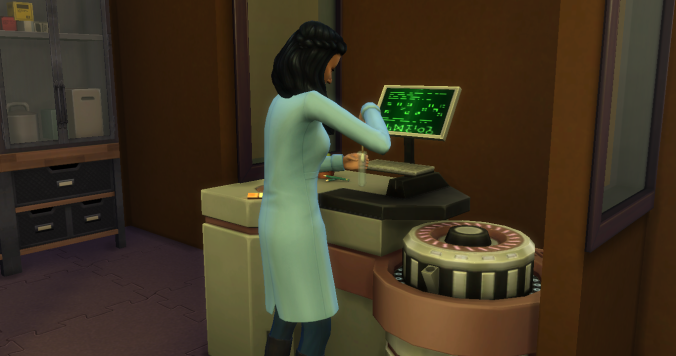 Asha missed her old lab, where everything was organised properly and she could work quietly and independently without having to rely on other people. Oh well, she had the samples she needed now and could just get on with her work.

Just then she felt a presence behind her. She tried to ignore them, they were probably just picking something up from the lab. But they didn’t go away and she realised they were watching over her shoulder. Feeling uncomfortable her hand slipped and she broke a test tube, ruining her experiment!

‘Whoops, clumsy!’ The receptionist guy laughed and shook his head, walking away chuckling.

It wasn’t funny! There was glass inside the machine and all her samples were spoiled! She would have to take the machine apart to clean it, and collect and categorise all the samples again! Stupid man! What had he been lurking around like that behind her for anyway?

Professor Spencer was concerned. Dr Khan seemed to be having a lot of difficulty settling in. He wondered how he could make things easier for her. He was worried she might quit, and he really needed someone with her skills and experience on the team. He recommended she move over to the chemical lab while he got someone to clean up the mess.

When Asha got home that evening she was exhausted! But her family rushed out to meet her when she stepped off the rail-car. She smiled as Amar and Jasminder joked about something that had happened in school that day, and her son gave her a huge hug. They asked about her day and she told them how she’d broken a test tube and made a mess, but she made it sound funny and didn’t let them see how upset she’d been about it. She told them she’d finally met her boss, and that he seemed nice. Then Mahinder kissed her and told her how proud he was.