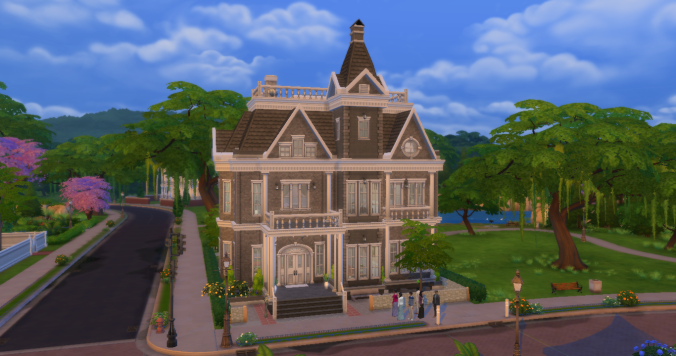 I am SO excited to finally be playing this family in my rotation! The son, Amar, is such a great sim to play with and I have a lot of affection for him and his family. Amar joined my game in TS2 where one of my sims adopted him as a child. Do you know when you meet a game generated sim and get instantly attached? That’s what happened with Amar! In TS2 he worked hard and got great grades in school, going on to graduate from uni with top marks! He then got involved with one of my other main sims (I won’t tell you who just yet) and so he became one of my core sims permanently. ❤

In TS3 he was no longer an orphan in need of adoption, he was given his own family. The Khan family became one of my favourite families to play… they are just so lovely! And I'm so pleased with how they turned out in TS4 that I'm more attached than ever! They are available on the gallery for anyone who wants them, but they do use quite a lot of my custom content including my hippy maxi skirts, my accessory vests, and my plain Romantic Garden t-shirt. I'm sorry for that, hopefully I'll remember to upload a cc-free version soon.

Amar looked up at his new home uncertainly, it looked kind-of old-fashioned compared to the modern, air-conditioned villa he’d left behind. But he was excited to be in the new town, with all its new opportunities, and the Wi-Fi was fantastic! Well, he might as well go inside and try and find the best room before his sister did.

Jasminder was still on the curb, staring up at the imposing building in admiration. She loved its cute cornices and its pretty balconies. It was like a fairy-tale house!

Her father, Mahinder, saw her excited expression and smiled. He’d been worried about how his children would handle such a dramatic change, so he was pleased to see that Jasminder was happy.

‘What do you think?’ he asked gently.

‘Well, what are you standing around on the curb for?’ Mahinder laughed with a wink, ‘Go and explore! You know your brother will be coveting the best room… but my princess gets first choice.’ As Jasminder disappeared into the house, Mahinder spotted his parents arriving. Kamini and Sanjeev have lived in Willow Creek for a long time and own a restaurant in Oasis Springs, their successful business enabled Mahinder to attend medical school. That morning, Sanjeev was grumbling: he was annoyed that his son had spent so much money on a big old house. Kamini was just excited to have her family so close to her! She couldn’t wait to start spoiling her grandchildren! Maybe she could help her daughter-in-law around the house, and teach her some of her family recipes. ‘Why did you go and spend all that money on an old house like this, Mahinder?’ Sanjeev chided as a greeting, ‘Don’t you know old houses like this always need work? You’ll spend all your money fixing the place up! You shouldn’t waste money like this. Didn’t I teach you anything?’

Kamini hugged her son eagerly, ‘Now, where are those beautiful grandchildren of mine? I have two years worth of kisses to cover them with!’ She hurried past them into the house.

‘So, this is the living room…’ Mahinder led the way into the house, ‘You can see the house has been well cared for.’

‘Ah, I always knew my son had good taste!’ Sanjeev exclaimed loudly, ‘Look at how well this house has been maintained! I knew I raised you well, you have my eye for quality.’

Mahinder laughed, ‘Yes, father, you taught me well. I told the agent I needed a luxury house for my family.’

‘I’ll admit, you had me worried,’ Sanjeev confessed, ‘I thought it was practically derelict like that Goth house across the road!’ 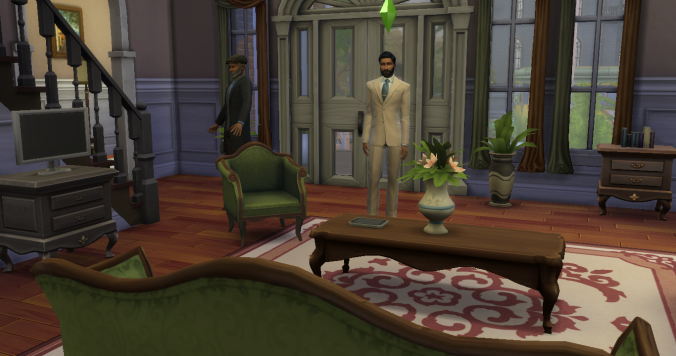 ‘Oh, it’s beautiful!’ Kamini breathed as she entered the room, she’d already investigated every nook and cranny. ‘I asked Asha if she was going to come down and show me round her kitchen, but she said she had work to do. Why do you have your wife out working, Mahinder? You earn enough money, she should be at home taking care of you and the children.’

‘She works because she wants to, mother, I don’t make her,’ Mahinder bowed his head.

‘My son is smart, Kami!’ Sanjeev cried, ‘You think he’d choose just anyone as a wife? Asha is a smart, educated woman and she would be bored at home all day! She needs to get out there and use that big brain of hers!’

‘If she wants to work, why doesn’t she come and help me at the restaurant? I could teach her how to cook real food.’ Kamini suggested eagerly.

‘We’ve talked about this before Kami! Asha is a trained scientist.’

(They argue like this all the time. Asha didn’t really have work to do, she just wanted to stay out of the way of her mother-in-law, she was actually playing blick-block.) Sanjeev left the conversation to go and hunt out some food.

(I find him really funny, because he always makes a bee-line for the kitchen. When I originally loaded up this family, I had the game running for about 10 seconds and found Sanjeev in the kitchen eating a plate of cheese and olives. Typical Granddad! XD )

Jasminder was doing her prep-work for her new school, when she saw her granddad rooting around in the fridge she jumped up eagerly, ‘Sit down Granddad! I’ll make you something to eat!’

‘Ah, I’ve missed you Jazz,’ he said hugging her warmly, ‘I’m so happy you are here!’

‘I’m happy to be here too, I’ve missed you and grandma so much!’

Jasminder busied herself in the kitchen. They’d ordered in some produce but it wasn’t very good quality. She did the best she could with it. Urgh, she would need to try and get some better quality ingredients soon!

After Sanjeev and Kamini left, Asha sat down with her father who was watching a sci-fi movie (now she knew where her brother got that interest from!). They chatted for a while about their hopes for school and work before Mahinder started to look a bit uncomfortable, like he had something to say. Jasminder waited patiently.

‘You know…’ Mahinder began awkwardly, ‘…the boys here, they’re not like the boys back home. They might be a bit… friendlier, more… outspoken.’

Oh no, Jasminder thought, he’s not giving me ‘the talk’ is he? She wanted to run away and hide!

‘Don’t worry,’ Jasminder reassured him before he said too much, ‘I’m sure it will be fine. I’ll stick with the girls. And Amar will be there too, if I need him.’

‘Well…’ Mahinder said slowly, ‘…the girls might be a bit more… a bit less… modest than your old friends.’

Little did he know! Asha thought. Out loud she said, ‘Don’t you trust me Daddy? Look, you and Mummy are smart. You think I’m not smart too? I’ll be fine.’

Suitably chided, Mahinder nodded and patted his daughter awkwardly on the shoulder. It was getting late and, both suitably embarrassed by the conversation, they made their way to bed. Jasminder smiled at her father’s concern, he was hopeless, but it was nice to know he cared about her. 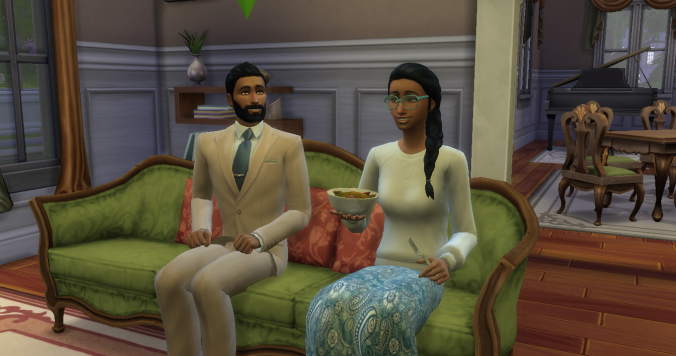 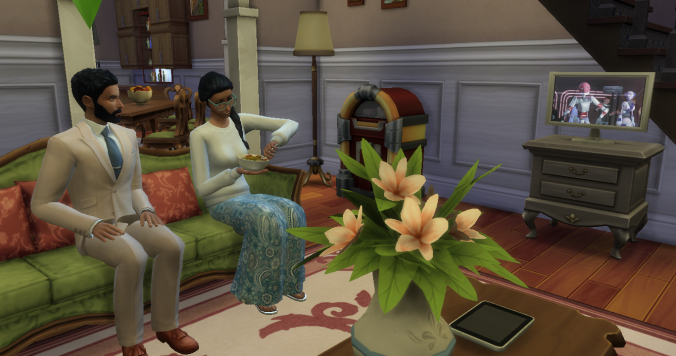 Exhausted from travel and an exciting day, Jasminder was happy to go to bed. Mahinder found his wife had already fallen asleep. He looked at her affectionately, then snuggled in beside her. He hoped he had made the right decision bringing his family here. 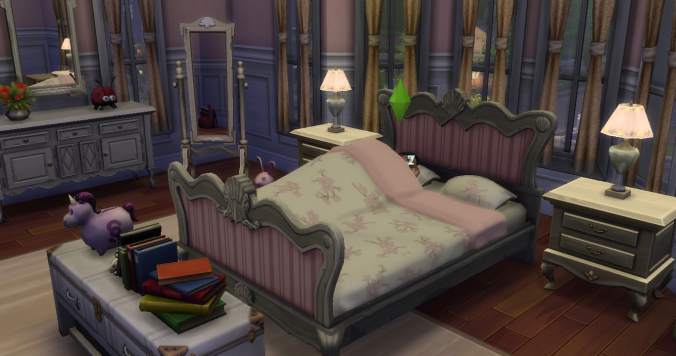 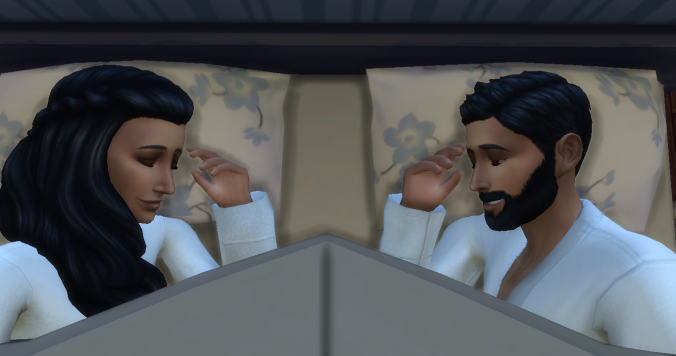 If you like this beautiful Victorian house (and why wouldn’t you? It’s amazing!) you can find it on the gallery. It is called ‘Victorian 12’ and it is by Itsasimsession. It’s definitely one of my favourite houses in the game!