The Swan family are off to a troubled start. Their move to Newcrest was a bit hurried as they have had to flee their home town due to social and political unrest. Unfortunately, one member of their family was left behind, Sim had been arrested during a protest and was imprisoned indefinitely. Just as things seemed at their bleakest, Pierre fled with his two aunts to Newcrest where they used what little savings they had to buy a small shop with a tiny apartment above. It was small, but it was safe. The whole family are artists! Amalie is a painter and Estelle has a fine arts degree, so they were pleased to find the small retail space was already set up as a gallery! The plan was for Amalie to produce most of the paintings, and Estelle would run the business.

(I based the gallery on the one from the game ‘Broken Sword 5’ as I really love the style of that game.) 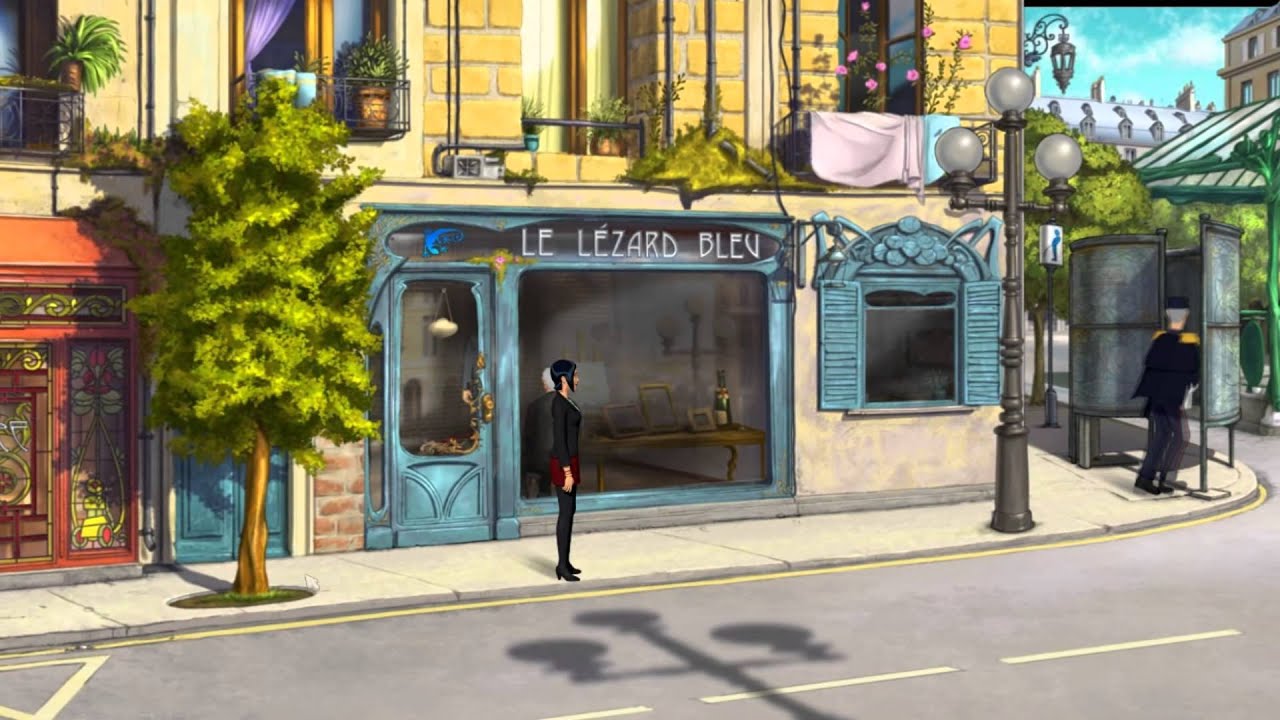 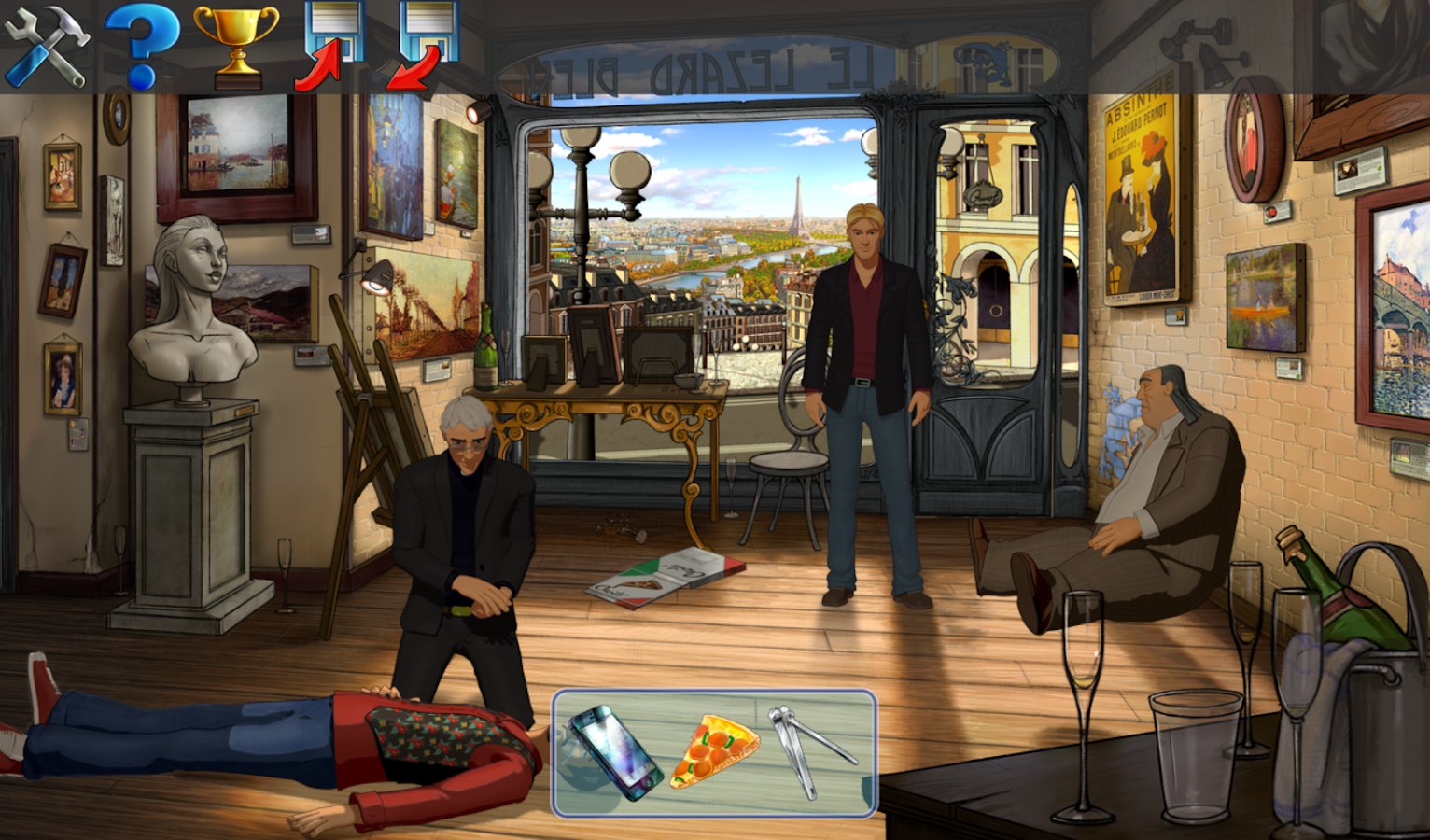 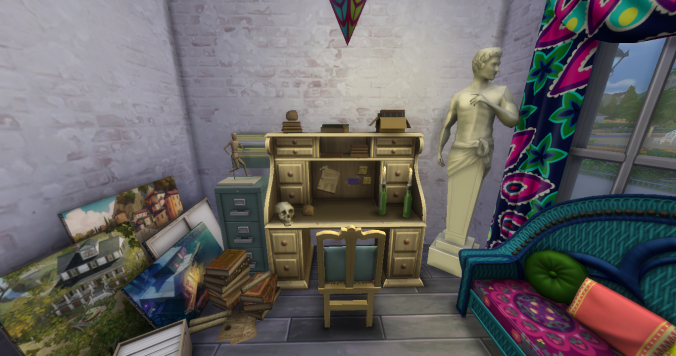 When they arrived at their new home, Pierre was feeling guilty that he’d left his mother behind.

‘What could you do if you were there?’ Estelle rationalised, always the most pragmatic aunt.

Amalie was softer, ‘She will be happier knowing you have escaped. Knowing you are safe will be her greatest comfort.’ 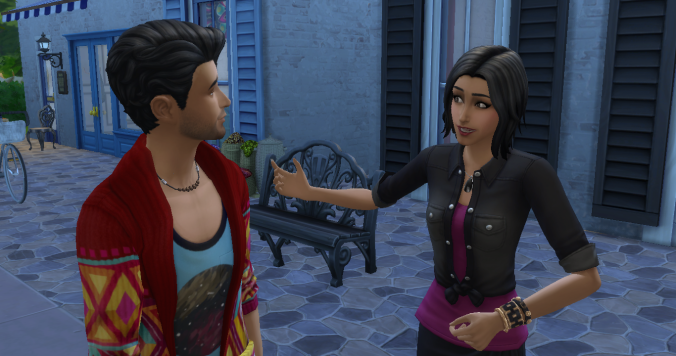 Estelle was keen to inspect the new premises. She knew if they didn’t make some money quickly they would soon run out! The previous owner had left some things behind, but it wasn’t much, there was little worth selling. She hurriedly ushered her sister to one of the old easels, and encouraged her nephew to attend to his studies.

‘You must do well,’ she encouraged, ‘if not for yourself, do it for you mother. Perhaps you will be a successful lawyer and get her out of that forsaken place!’

Then Estelle attempted to paint as well, although Amalie had always been the one with the talent. Hopefully she could produce something sellable. If not, Amalie could always paint over the canvas with something better.

After Pierre finished his work he felt the need to escape into the fresh air outside. He took a stroll behind the shop and sat on a bench by the river. He felt so out of place in the bright sunshine, like he should be enjoying the beauty of the place, but in his heart he was somewhere else. His mind was still back home, in a damp cell, desperately clinging to his mother’s hand. But what could he do!? A million thoughts rushed through his mind, a million scenarios, none of which ended well.

He’d brought his old guitar from home, he found it now, and began strumming a few sad notes. The humming chords seemed to echo something deep inside him and he let a few more throb out. Soon he was lost in the music. 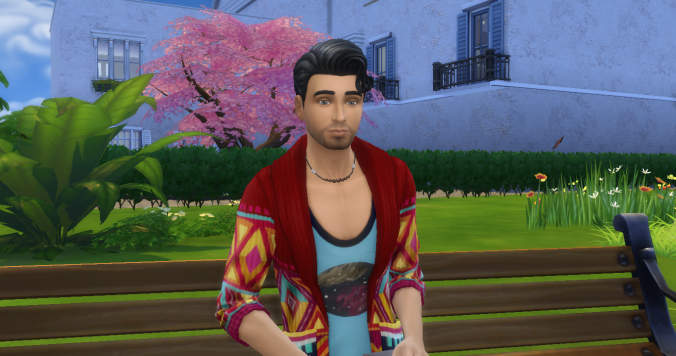 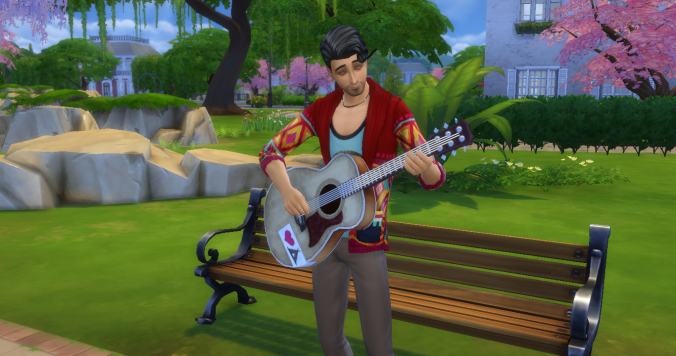 Estelle too found relief in music, but when she picked up her father’s old violin the keening noise was something more painful. In the shop below, Amalie couldn’t stand it. Not because the music was bad, but because, like Shostakovich, it expressed something too sad to bear. Several paintings now hung on the walls, they weren’t her best work but they would do for now. She washed the red paint from her hands and escaped outside. It struck her that they had nothing to eat, and so she busied herself with collecting from wild plants until the music stopped. Then she returned to cleverly replant some of the produce so they would have food in the future.

The only food they could rustle up that evening was cheese and olives but they enjoyed it as it was the first thing they’d ate since leaving their old home.

Pierre and Amalie felt asleep easily that night, they were exhausted. But Estelle was too excited to sleep. She was hopeful about their new life, and the possibilities it brought. They planned to open the gallery the next day, and she wanted to get out and try and encourage people to attend. At least, this was the reason she told herself. The real reason was that she was itching to explore the new town, to get out there and experience life again!

Stealthily she slipped out of the house and over to the old part of town, where she found a club with music pumping out onto the street. She didn’t feel afraid. After what she’d experienced back home, she felt like there was nothing to fear here. She chatted away to as many people as she could, inviting them to the gallery. They didn’t seem too interested in art, and they probably weren’t her target customers, but she had fun anyway. It was late when she got home, but Estelle took a few minutes to enjoy a drink on the balcony. She admired all the dazzling lights and felt confident they had made the right decision. Then she quietly slipped into the bed she shared with her sister.

(Sim Wish: it would be so nice to be able to click on a door and have a ‘prop open’ option.)

(I had to have Estelle and Amalie share a bed! They did this in TS3 and I found it so sweet.)