World Adventures is my favourite Sims 3 expansion! I just love that we got three interesting places to visit, full of interesting skills, foods to try, and things to do! I had a lot of fun exploring the tombs and hunting for new collectables. So when CSimsie decided to start a Let’s Play series about it, I knew it was only a matter of time till I’d be tempted to play it again myself. You can check out his adventure series here:

So, I made a couple of brand new sims! My idea was that I’d have a typical Indiana Jones style adventurer who could do the exploring, but I also wanted a female companion who would take advantage of the beautiful scenery by painting and photographing the landscapes. So, I created Indie Jones [creative name] and his wife Kara Maat [slightly more creative, her name is a play on Maatkare, an alternative name for the female pharaoh Hatsepsut, whose tomb can be found in the game. ‘Maat’ means balance and order, when ancient Egypt had a good ruler they would bring Maat to the land]. The couple live in the vibrant city of Bridgeport where Indie has accepted a job as a professor of antiquities [naturally]. Kara is hoping to open a small art gallery to sell her paintings and photographs, but their apartment is tiny and unfurnished and they need to raise some funds. They have a little bit of money, and they plan to use this for their visas and their first trip to Al Simhara. Kara has family there, and she knows the place well. She is hoping her connections will help Indie get some work out there during the summer months, before he starts his new job next term. 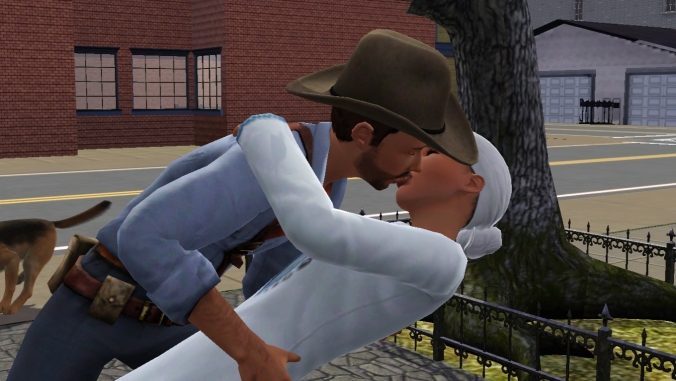 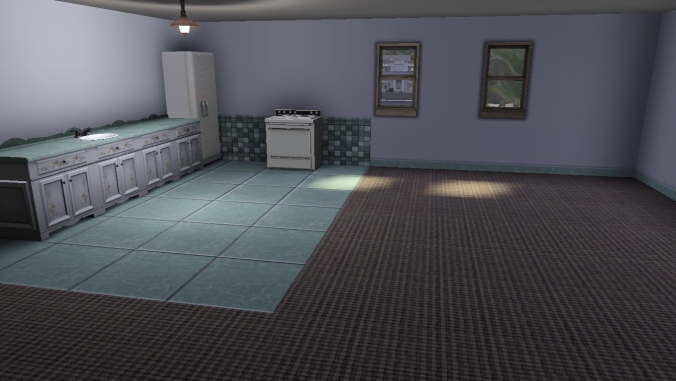 Oh yeah, and they have a dog… Trouble. I guess you can figure out why he has that name. 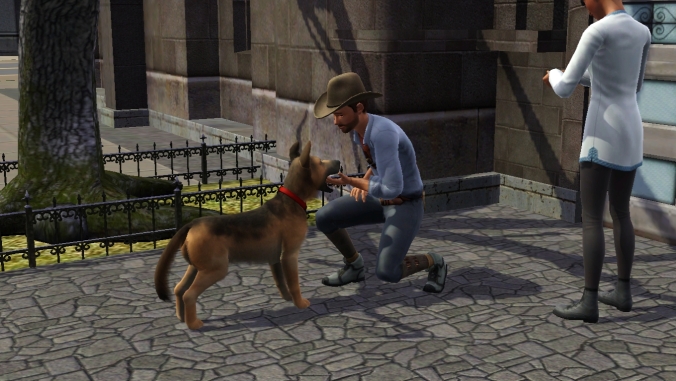 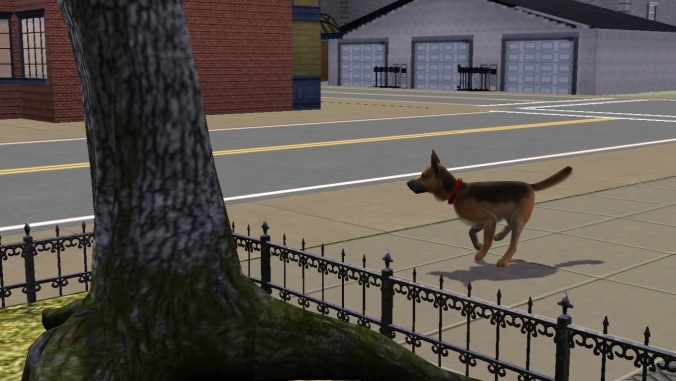 Sadly, Trouble couldn’t travel with them this time as the visa only lasted 3 days and there wasn’t enough time to get him through the quarantine period, but maybe he’ll get to go one day if they get an extended visa. Indie and Kara packed a minimal amount of supplies, grabbed their papers, and said goodbye to Trouble before hopping in the cab to the airport.

‘Don’t worry,’ Kara whispered to Indie, ‘Trouble will be fine with the neighbour.’

‘I know,’ sighed Indie, glancing back over his shoulder at the excited mutt, ‘but will Mrs Spann be alright with Trouble?’

After a long flight they arrived in glorious Al Simhara. The base camp seemed clean enough, and the other tourists appeared to be pretty friendly.

‘It’s beautiful,’ Indie gasped as his eyes scanned the lush trees, a healthy green against the backdrop of golden sand.

Kara smirked affectionately, ‘It’s like you’ve never been here before. Didn’t you come here as a student?’

‘I did,’ Indie admitted sheepishly, ‘but you weren’t here then. It’s more beautiful with you in it.’

‘Such a charmer!’ Kara chided playfully, giving him a big hug.

‘Come on!’ Indie cried suddenly, ‘I’ll race you to the market!’

Kara laughed, ‘Do you even know which way it is?’

But Indie was already on his scooter, racing along the hard sand road. He grinned confidently as he roared away. When he reached the path to the marketplace, he glanced over his shoulder. Kara was far behind him, there was no way she would catch up now. 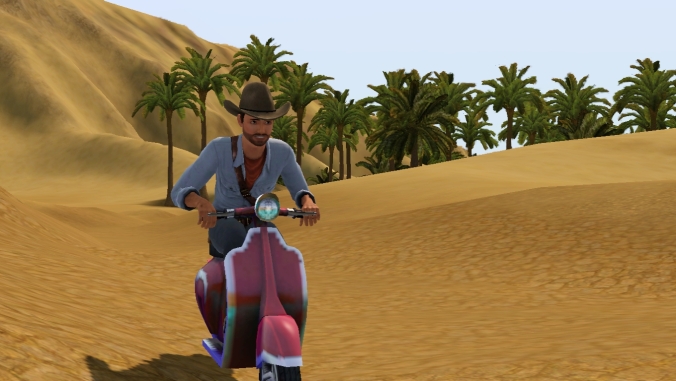 But Kara had a plan! She knew the sandy streets well: she’d played in the twisting paths between the houses with her friends as a child. Twisting off the main path she took a short-cut between some houses and ran straight into the centre of the market [she really did this by herself, I didn’t direct her]! She laughed as she saw Indie racing past at the top of the alley, he was so intent on winning the race that he didn’t even spot her waving.

As Indie panted into the courtyard, Kara strolled over laughing. ‘What took you so long?’

Indie groaned but was too busy catching his breath to answer.

‘That’ll teach you not to leave your wife in the middle of the desert!’ Kara scolded him playfully, pretending to look angry. 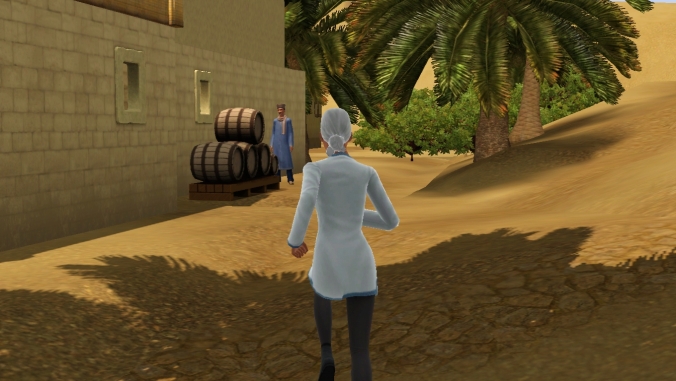 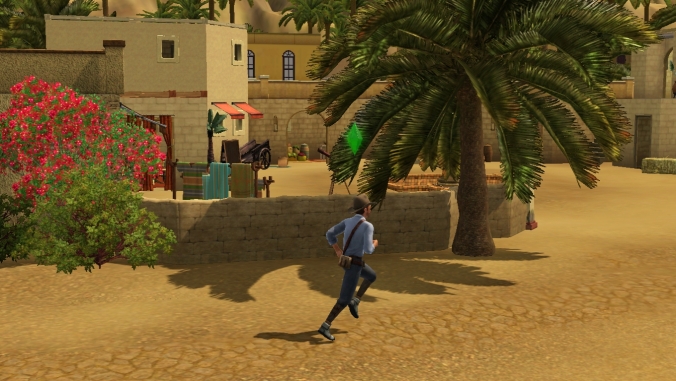 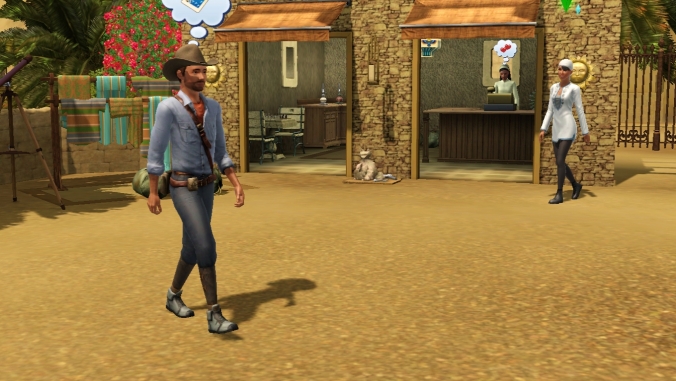