So, the Sims team decided to revive the Spring Easter Egg Hunt but threw in an extra (eggstra?) twist. We now have an optional challenge of hunting down a new NPC at the community gardens in Oasis Springs or Willow Creek. Jasmine Holiday will give us a single pack of a new ingredient/plant called ‘growthfruit’ and a pack of fertiliser, she then asks you to return once you have grown 20 of the fruit for a special reward. So, I decided to send Cinderelli-sim over to check this out… 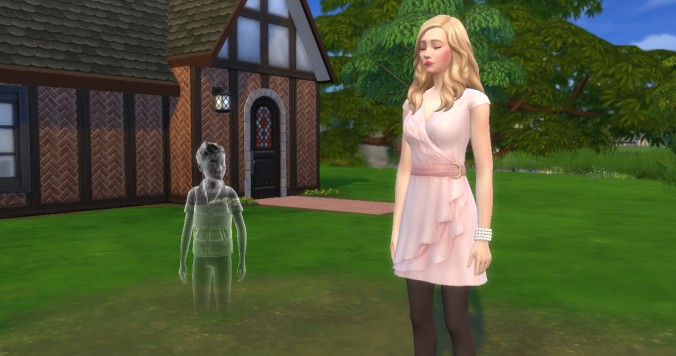 The initial excitement of having a ghost protégé had worn off and Cinderelli was feeling nervous about her new role as fairy ghost-mother. What was she meant to do with this kid? She didn’t know the first thing about parenting! INTERNAL PANIC!!! Telling the sprog to go and do his homework seemed like the sort of thing a ‘good parent’ would do and a good way of distracting him while she thought about what to do next. FOOD! Kids need food. What kind of food do kids like? Chocolate brownies!!! She might be a terrible cook, but she can do the baking thing! Sprog seemed impressed! Cnderelli patted herself on the back for being an awesome parent and chatted to Parker while they ate. He seemed to like her bad impressions and cheesy jokes. However, Cinderelli-sim was still feeling a little concerned. Suddenly the kid jumped up and took his plate to the bathroom. Cinderelli followed him curiously and happily found he was washing his plate! Maybe having this kid around could be a good thing, Cinderelli thought as she absent-mindedly dumped her own plate on the hall table. XD 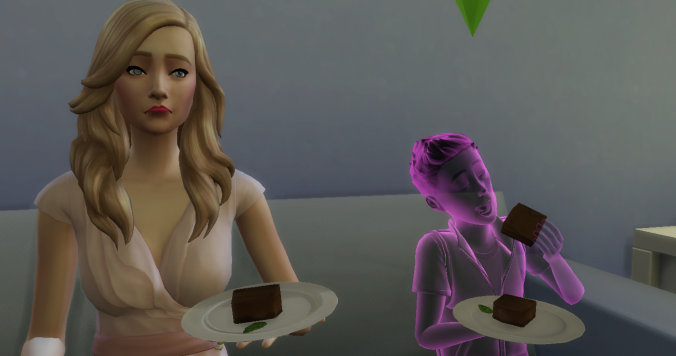 Rosy-fingered Dawn appeared and the new friends went to the community garden at Willow Creek to look for the new NPC. It took a few minutes of awkward standing around before Jasmine Holiday appeared. Cinderelli went over to greet her and they walked together. Jasmine’s expression made me laugh, like she thought Cinderelli-sim was bonkers [she is]. And… this is where it went a bit wrong for me. I have to admit I really like having this special NPC, and I like the new fruit, and the challenges! Only… I really dislike that this is timed. I had Cinderelli-sim plant the seed and she couldn’t use the special fertiliser to make it grow faster (maybe she needs a higher gardening skill?). So I sent her to look around for wild growthfruit (I’d heard that was a thing but sadly couldn’t find any). 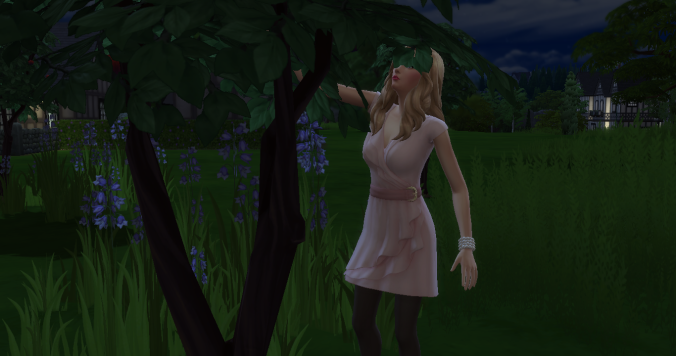 So then I had to pass the time waiting for the fruit to grow. This normally wouldn’t be an issue for me. I’d plant the seeds and get on with playing my normal game. But the fact that it is a timed challenge, and the fact that with 2 sick kids and a ton of coursework I’m very short of time at the moment, meant that I felt very rushed. I had Cinderelli paint to pass the time, and was jumping to speed 3 while Parker was at school. I never use speed 3 usually and I found that I really wasn’t enjoying the game, it’s not the way I play. I felt like I was just trying to tick boxes and I wasn’t engaged with the game or my sims’ lives. You can tell, as a result I have hardly any screenshots.

Finally the tree grew and gave me 6 fruit. I replanted one and saved the rest for the challenge. By this point it was late and I’d ran out of time to play. Since my game time is precious, will I be completing this challenge? Probably not. I felt rushed and didn’t enjoy it. If this wasn’t timed, I would have really enjoyed this feature. But now I feel like I’m going to miss out. If not on the content (which I believe will be in debug), on the gameplay.

I’d be happier if they kept Jasmine in the game all year round, and just updated her with the new content each season. So, I’d leave her in the community garden with her growthfruit. Then next time there is a challenge, like Spooky Day, maybe she’d move location to a park and offer a trick or treat themed challenge as well. This way, the content and challenges remain in game for those of us who don’t play seasonally, or who are short on time while the challenges are on. And you still get the new content and holiday-themed challenges.

Anyhoo, I like how the tree glows. It’d be nice if the fruit glowed too. And Cinderelli-sim and Parker seem to be getting along well, Parker improved his grade at school. Plus, Cinderelli made enough money from selling her paintings to be able to buy a computer. She wrote a kid’s story: Caspian the Evil Ghost, a story about a misunderstood ghost child who only wanted to make friends. She thought it would help Parker be able to talk about his feelings about his ghostly condition, and understand that even though the game gave him an evil trait, that he is not a ‘bad’ kid and he can still make friends and have a good life. He seemed really pleased. ^__^