Day 2 did not start well for the Freegan household. They were starving, stinky and in a bad mood. They had caught fish, but they had no way of cooking it since I have Plasticbox’s More Logical Cooking mod installed. They didn’t have the right ingredients for any recipes on the community grill, and sims don’t seem to be able to cook on the bonfire? Also, none of the wild plants had grown any produce. 😦

The Freegans took to befriending the locals to see if they could scavenge some food off them, or maybe persuade them to cook on the community grills. Even anti-social Daphne forced herself to talk to people (She wasn’t very enthusiastic and I’m not sure they were too impressed).

‘Is that a morsel of cookie I see on the corner of your lip?’ Penelope was a bit more enthusiastic about talking to the locals, especially when she found a fellow art lover! She asked about local fishing spots and gossiped about the neighbourhood, to try and figure out a survival strategy. Always optimistic, she decided to try and collect things to sell (farewell to their ideals of rejecting consumerism). Apollo joined the scavenger hunt. Daphne was in a pretty bad way and was not feeling hopeful about the new venture. 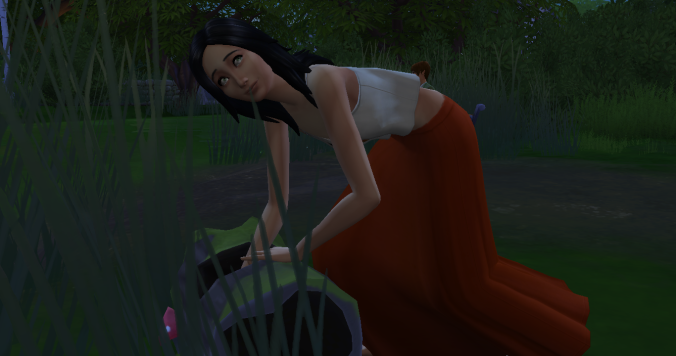 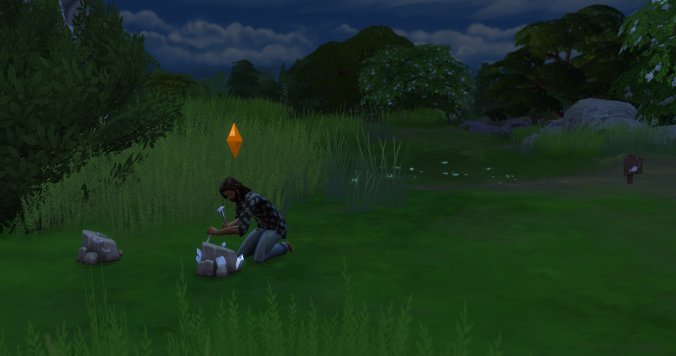 Based on info from the locals, Penelope led her friends to a busy spot near the bluffs. People passed through often to go hiking, or go to the beach, and on a sunny day it was bound to have a lot of potential customers! Penelope found an old discarded counter and jar to use as a makeshift till, and spread the items for sale across the grass. Then she ran off for a quick pee in the bushes before the customers arrived. Daphne was exhausted and soon fell asleep in a bush. Apollo attempted to scavenge the beach for more things to sell, while sadly admiring the views, and ultimately collapsing on the warm sand. 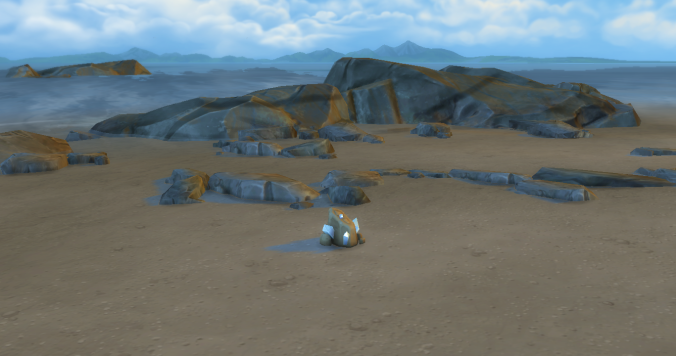 Gradually, curious sims began to wander over to see what was for sale. One woman was very nasty and had a constant expression of a grumpy trout. Penelope tried to be nice and brighten her day, but the woman continued to be rude and eventually Penelope had to ask her to leave. Fortunately, the other customers were nicer. The adorable Geoffrey Landgraab was interested in the geographical and biological objects like the crystals and frog and he even helped Penelope make a sale. Kind man. People admired Penelope’s enthusiasm for her makeshift store and soon she was ringing up several customers! Realising that the store was actually making money and that Penelope needed help, Daphne and Apollo put their discomfort aside and tried to help! Daphne even managed to smile and be pleasant to people! Poor Apollo collapsed as soon as he made it back and didn’t help much.

Exhausted, Penelope closed the store. Apollo woke up in time to congratulate them all for earning $147 on their first day and suggested they reward themselves with a visit to the local pub! I have to admit, I’ve arrived at a country pub feeling exhausted and stinky more than once in my life! XD The Freegans wandered in eagerly to the warmth and comfort. Penelope ordered some chips while Apollo and Daphne made their way to the bathrooms to freshen up. The barmaid had seen it all before and (averting her nose from the smell) kindly announced it was happy hour.

Apollo took advantage and ordered himself a huge plate of warming currywurst. He sat to one side feeling like a social leper and was surprised when a lady seemed to take a fancy to him and sat beside him. She must have liked the ‘Dirty and Desperate’ look. Ok then. The rest of the evening consisted of generally trying to improve their mood by eating free bar food, stealing drinks, brushing their teeth in the restroom, and collapsing on every available surface. 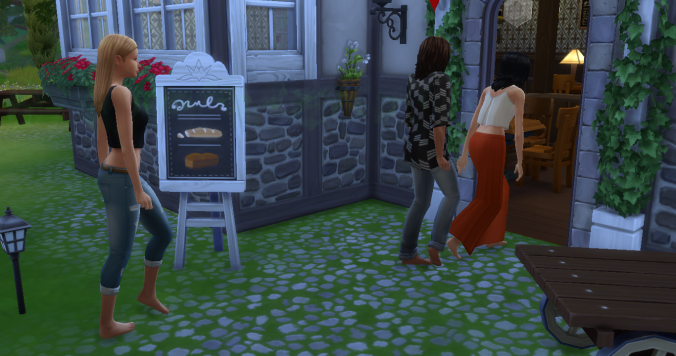 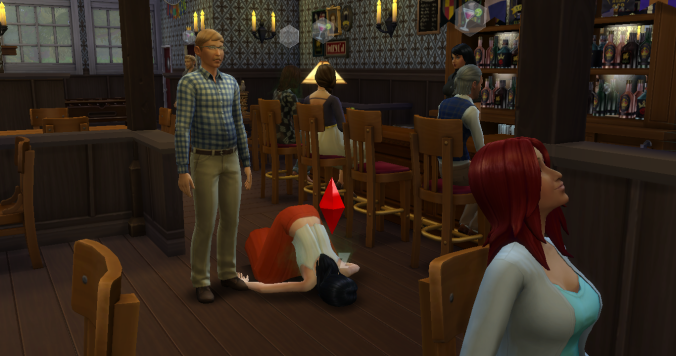 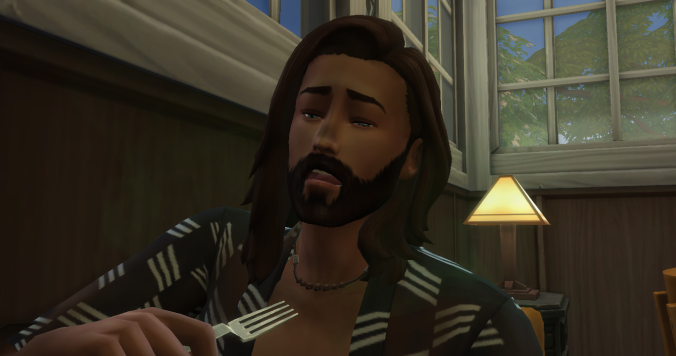 Suddenly the bar was overrun by bears! Was this woodland really a good place to be sleeping under the stars? O__o

It was all a bit too much for Daphne who had to escape the crowded bar. She wandered off to sleep outside on a bench (all the bears were in the bar so she figured it was safer). And Apollo and Penelope found a quiet corner of the bar to nap in. Their first two days of anti-establishment freedom had not been as much fun as they’d thought it would be. However, hopefully the next day would bring abundant wild plants and their hunger troubles would be solved! Then they can focus on collecting more things to sell, and saving enough money for basic essentials. It’s a shame there aren’t more ways to get things for free. I really miss dumpster diving. 😦 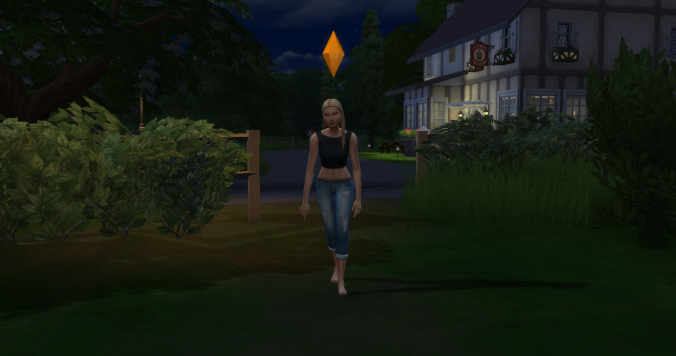 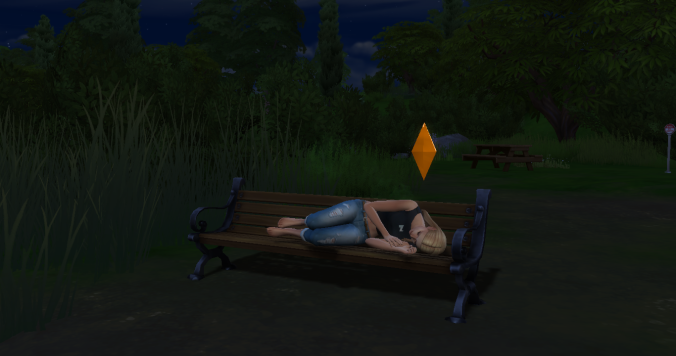