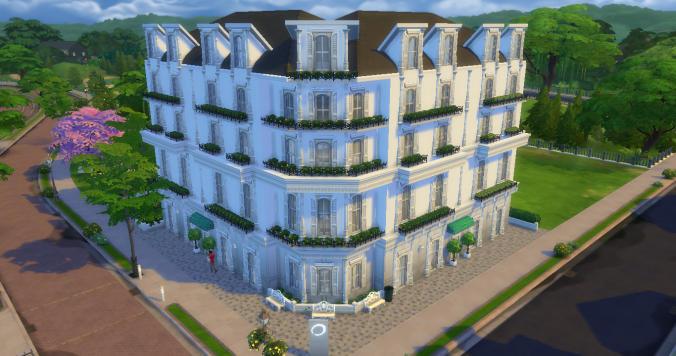 While Antony was busy schmoozing his way to the top of the politics career (at least that’s what he thought he was doing) his ambitious wife Astor was pulling the strings in the background. The day began with an inspirational speech about the importance of appearances, and how it was no good getting the best marks in school if you didn’t brag about it too. Anastasia smiled and agreed with her mother, but sighed as Astor left the kitchen. She was so tired and stressed from juggling all her coursework already, but was also being pushed to join the debate team, AND to write an article for the school newspaper. She was good at multitasking, and was ambitious enough to want to succeed, but the additional pressures being heaped upon her were pushing her to breaking point.

Uncharacteristically, Astor noticed her daughter’s sighs and gave her an encouraging hug. She’d been there herself once and knew what it was like to be pushed to succeed. ‘You can do it, darling,’ she whispered, ‘You might not think you can, but I KNOW you can.’

After the girls had left for school, Astor sneaked out of the house without encountering her mother-in-law. Se wanted to enjoy a relaxing visit at the spa, and didn’t need Felicity dragging her to brunch with her dusty old friends, or be forced to sell jam or badly knitted baby clothes at a church fundraiser. Felicity could network in her own way, Astor had other ideas! She had already joined the most exclusive spa in the area and was planning on making some ‘high quality’ connections of her own! And why shouldn’t she enjoy herself while she was at it?! 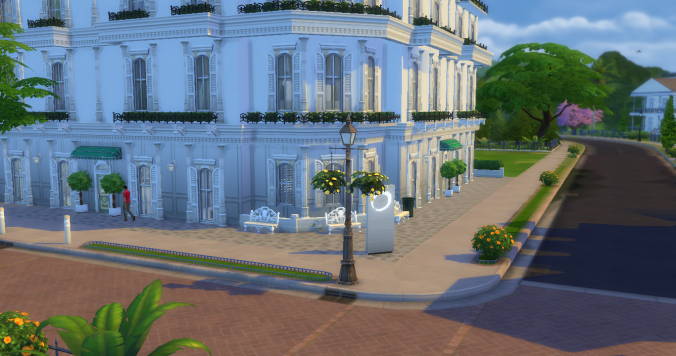 Astor walked in like she owned the place and acted like she knew what she was doing by following another customer around. She quickly realised the customer was Nancy Landgraab, the famous business woman and art dealer! She was just the sort of ‘high quality’ person Astor needed to befriend! But despite her best efforts to engage in conversation, Nancy was oblivious to Astor’s presence.

(Astor actually did follow Nancy around autonomously! I love it when my sims behave in the way I imagine they would!) Despite being unable to make any decent connections, Astor had a wonderful day at the spa! She had a massage, and a drink, and a manicure, and another drink, and a drink in the Jacuzzi. She was feeling wonderfully relaxed when she remembered how hard Anastasia had been working at school! Astor had never been academic, being pushed more towards the creative arts, and she was silently impressed by her eldest daughter’s book-smarts. And although her youngest daughter was hopeless at achieving anything, Claudia shared mother’s mischievous streak that Astor secretly admired. She decided to treat both her daughters to spa membership and called them round to join her after school! 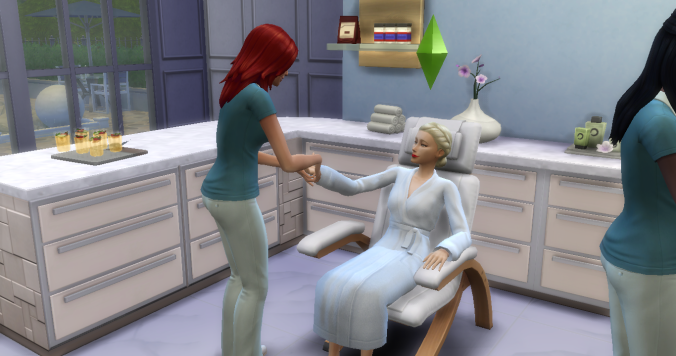 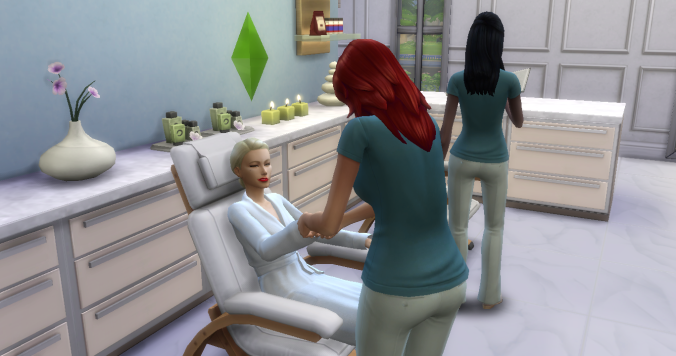 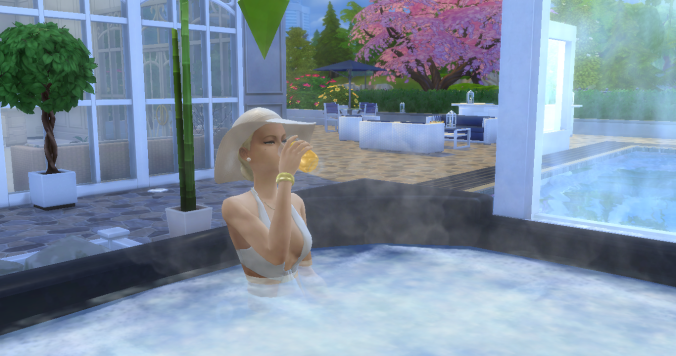 The girls arrived and decided to do a yoga class. Anastasia got a bit stinky… but we won’t mention that again. And Claudia characteristically had to be difficult and did the whole class facing the wrong direction while wearing her sunglasses. ^__^

Nancy was taking part in the class and when she recognised Claudia from the art gallery, she gave her the ‘call me’ sign. 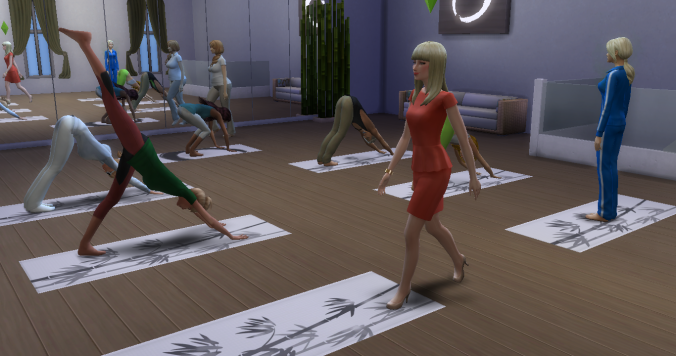 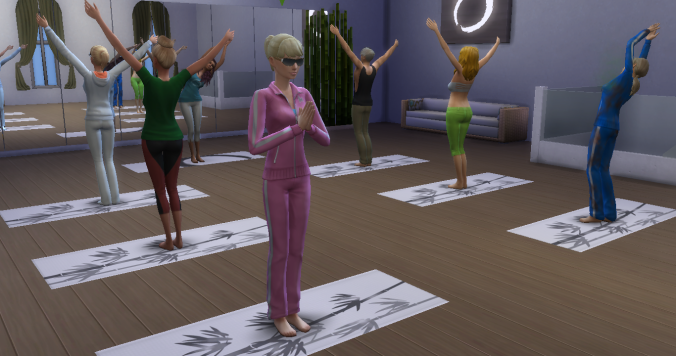 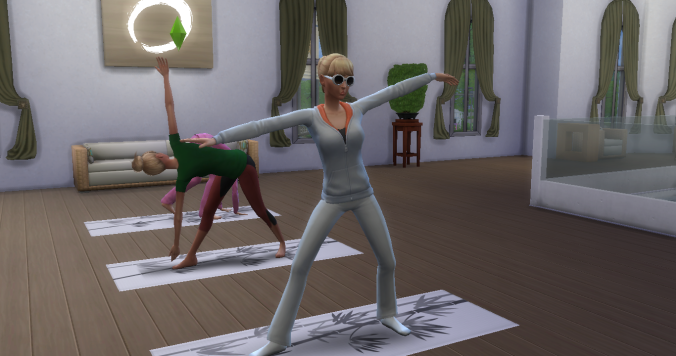 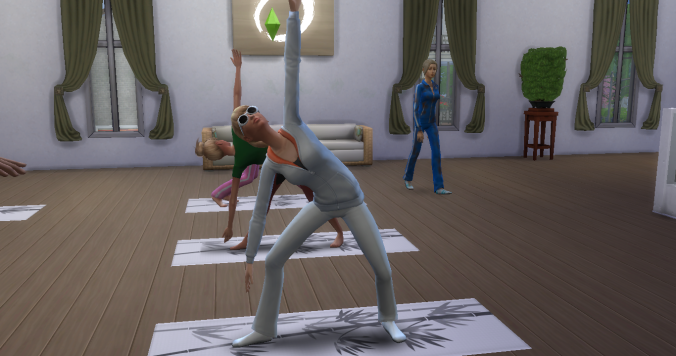 As it grew dark, the family wandered home… in their towels. 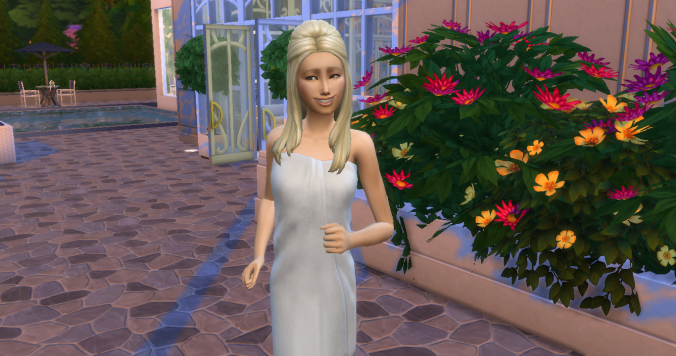 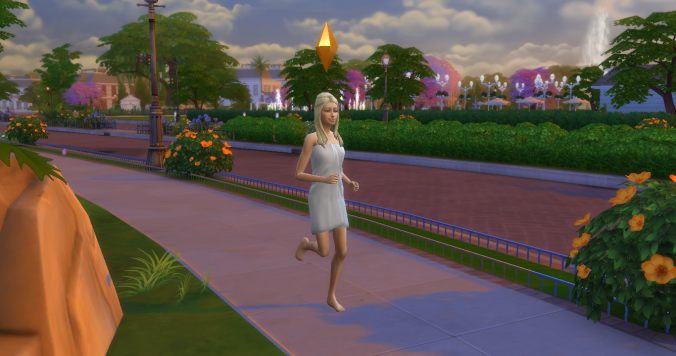