Poor Renauld, he was pleased his wife Catarina had busied herself with her work but she was so distracted that she wasn’t doing as much around the house as she normally would. Now, Renauld wasn’t sexist enough to think housework was a woman’s responsibility… he was just not very good at picking up the pieces. He was tired of jam sandwiches for breakfast and he was tired of his back creaking when he loaded the dishwasher. He decided to hire a housekeeper! He’d heard the Kensingtons had hired one, why shouldn’t he?! He rand a few of his friends to see if they knew anyone. To his surprise, Lonnie Pertridge (the wife of his old friend) suggested her own step-daughter for the position.

‘It will do the lazy girl some good to know what real work is like!’ she remarked.

Well, this was hardly a glowing reference for the girl, but since Lonnie implied the girl would work for free as long as she was provided with lodging and food, sort of like work-experience placement, and because Lonnie said he would be doing her a favour, he felt obliged to agree! 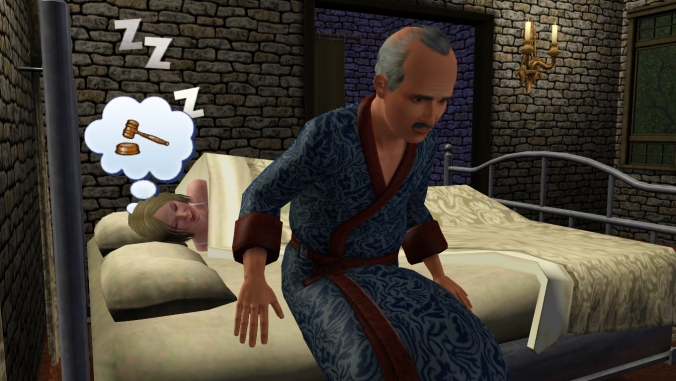 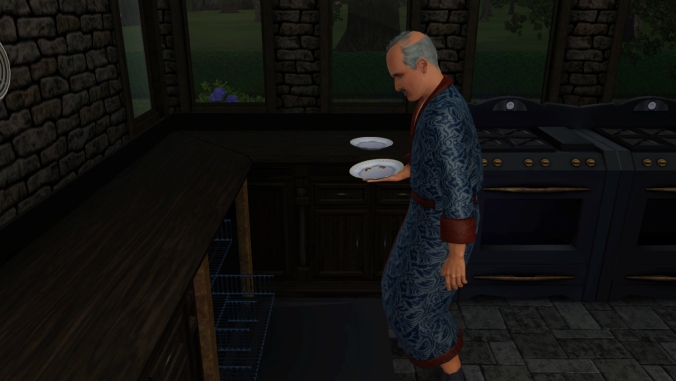 Over the next few days, Renauld began to regret his decision and worried about what the girl would be like. But when Ella Carlisle turned up at the house he was pleasantly surprised! She seemed very polite and reminded him pleasantly of her father, his old friend. Feeling much more cheerful about the whole situation, he directed her into the house and decided to congratulate himself with a few games of chess at Crumpleton Library.

Poor Ella! A bit confused by the old man’s instructions, Ella explored the house until she found her cabin room. Fingers trembling, she nervously changed into her work uniform. Sighing, she looked at herself in the mirror, anything had to be better than living with her wicked stepmother, right?! Although she was practically working as an indentured servant, with no pay, this was her chance at freedom! 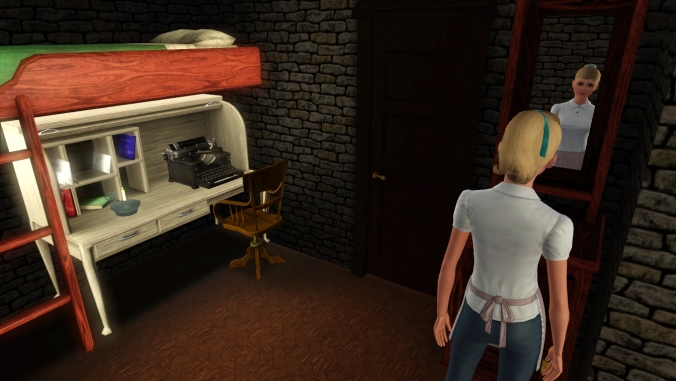 Taking a deep breath to steel her nerves, Ella thought she should provide breakfast (one of the few vague instructions Mr Vanderburg had given her) and made her way to the kitchen. Oh my! A man was already in there and he seemed startled to see her! He was in his underwear, so Ella averted her eyes and acted as though she hadn’t seen him. The man quickly darted out of the other door and Ella giggled to herself. Perhaps life in Crumpleton would be better than she imagined! 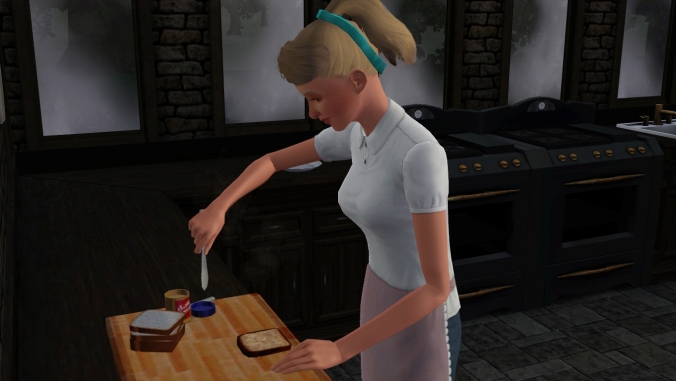 What made me laugh was that Sebastian seemed eager to impress Ella! He autonomously went to work out on the treadmill straight after this encounter! 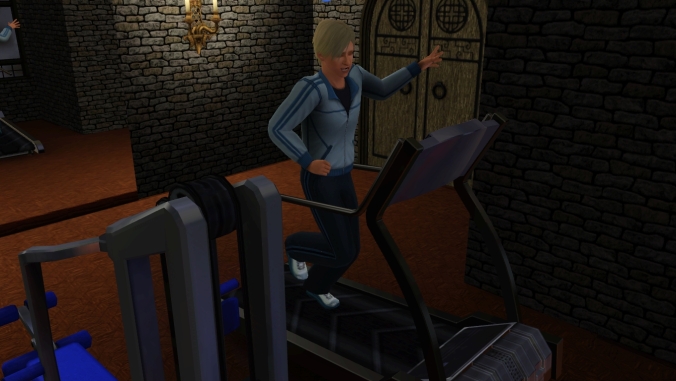 (Note: this is my second ‘housekeeper’ sim in Crumpleton. I was worried about the game using these sims to fill service roles so wanted to give them a named job. I thought about giving them the Nraas ‘homemaker’ profession but it didn’t seem quite right. At the moment they are ‘unemployed’ but I noticed my other housekeeper, Florence Taylor, was used to fill a service role. *sigh* Looks like I need to mod another career!)