Look at all this space!!! *runs around Newport dancing*

I’ve been missing the families of my main sims SO MUCH! They are part of my sims’ stories, their background, how they came to be the people they are! How could I not make them now we have the room!? So I started afresh! Kind-of. I’m taking my existing sims as a base and remaking them as teens with their families. This gives me a chance to edit them a little bit as well, since I’m a little more accustomed to using the CAS tools now. I started a brand new save file, but I’m bringing across many of my old builds to the new worlds. The only thing missing now is, yep, you guessed it, TODDLERS! *grumbles like Muttley*

The first family I decided to make are the Clausen family. Their backstory is that they moved to Magnolia Promenade from Aurora Skies, so their house had to reflect their Nordic background and also the port feel of Magnolia Promenade. I searched for images of real-life Reykjavik houses (since that was one of the places that inspired Aurora Skies) and found one that I liked the look of. Then I recreated it in coastal colours. It has a cute second floor entrance which I really like! In the backyard I made a fake sandpit with a low fence and terrain paint and I threw in a few toys so the kids would actually play in there. ^__^

I removed my mods folder and built a cc-free version of the house which is available on the gallery, just search #NordicCoastal. You can also find the Clausen Family on the gallery if you’d like to play along. A Week With the Clausen Family

This close-knit family are very close and affectionate, truly enjoying each other’s company and being part of a busy sociable household! Adelia is an earth mother, family-orientated and artistic! She loves painting while her children play around her ankles, and she spends a lot of time working from home. When she does have to promote her art-work she can always rely on her mother-in-law Ada to look after the children. Ada lives with the family, helping out around the house: she’s a great cook and she loves using fresh ingredients grown in the garden. 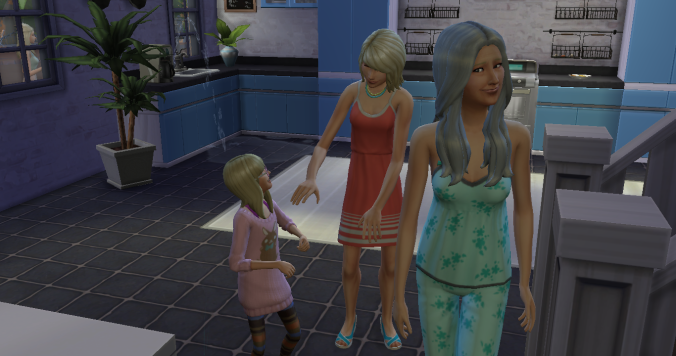 Adelia’s husband Iggy is a musician who had a couple of hit songs when he was younger. His band broke up and he has been kind of drifting ever since. His persona was quite dramatic (think Ziggy Stardust) but he is trying to focus more on his song-writing than his image. The problem is, his fans want the superstar they remember! He can often be found wandering around the house in his dressing gown, practicing songs on his guitar. He might be a bit of a dreamer, but his family support him.

Adelia has a habit of giving birth to twins! That’s what you get for being so family-orientated Adelia! Her first born children are Michelle and Felix. Michelle is the more outgoing of the pair: very confident in a happy-go-lucky kind of way, she takes everything life throws at her with a shrug and a well-timed quip. She is a goofball who loves to tell funny stories and make people laugh, a natural comic, she is considering following in her father’s footsteps and choosing a life on the stage! She loves being around people too, and enjoys capturing life’s funny moments with a camera or a short story. It is very difficult to make her angry as she always sees the funny side of a situation. Felix is quieter than his sister, but that doesn’t mean he is shy! He has a quiet confidence which comes from having a loud, but supportive family. Like his sister, he has a love of photography, but his motivation is to find the beauty in life, those transient moments of perfection that have to be captured in an instant. He shares his mother’s natural artistic abilities, but he prefers to appreciate paintings rather than produce them, relying on photography as his favoured means of expression. He’s a perfectionist and can also be a bit of a snob! XD

Kayla and Lena are the younger twins. These two little girls are complete opposites! Kayla is like a blazing ball of sunshine: very outgoing, energetic and playful! She is very active and would rather be playing with her friends on the park than studying. Lena is much more sensitive, she does not compete with the louder members of the family, preferring to read a book or amuse herself quietly. As a result, she is the most academic person in the family! Ada and Iggy encourage her love of the piano, and Adelia delights in her love of art, but Lena’s real interest is in nature and science! 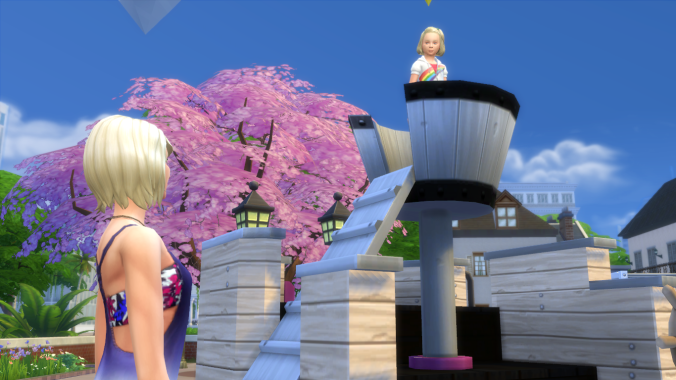 That’s it for part 1 of Meet the Clausens, part 2 will be up soon.